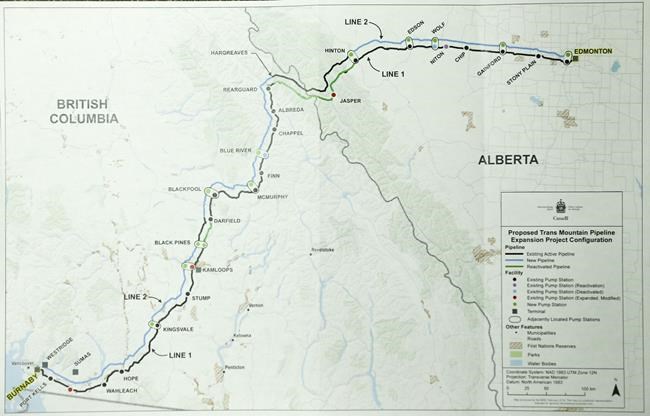 OTTAWA — The federal government is putting off plans to pass judgment on the reconsidered Trans Mountain pipeline expansion proposal for nearly a month in order to finish its consultations with Indigenous groups, says Natural Resources Minister Amarjeet Sohi.

The deadline is being pushed back — from May 22 to June 18 — on the recommendation of Indigenous communities and former Supreme Court justice Frank Iacobucci, who is advising the government on the consultation process, Sohi said Thursday.

"The government has consistently said that a decision would only be made on the project once we are satisfied that the duty to consult has been met," he said in a statement.

The proposal to twin the existing Trans Mountain pipeline between Edmonton and Burnaby, B.C., was first approved by cabinet in 2016. The Federal Court of Appeal rescinded that decision last August, however, declaring that neither the environmental review nor the Indigenous consultations had been properly completed.

After taking into consideration the impact of more oil tankers on marine life off the coast of B.C., the National Energy Board said on Feb. 22 that it still believed the project was in the public interest and should go ahead, subject to 156 conditions and 16 new non-binding recommendations for Ottawa.

That decision gave cabinet 90 days to make its call, setting May 22 as the expected deadline. But even as that report was being finalized, officials in Sohi's office were signalling that more time would likely be required.

It was not lost on some critics that Thursday's decision came two days after an Alberta election in which the lack of new pipelines played a significant role.

Conservative natural resources critic Shannon Stubbs also pointed out on Twitter the Liberals were announcing the deadline extension one month before the deadline and on the last day before the four-day Easter long weekend.

"Clearly never was a plan to decide in time for summer construction," she said.

Alberta premier-designate Jason Kenney, whose United Conservative Party handily defeated Rachel Notley's NDP government, ran on a no-holds barred approach to building pipelines. He threatened to turn off the oil taps to B.C. unless opposition to the pipeline is removed and also says he plans to hold a referendum in Alberta on equalization if there are no new pipelines built by 2021.

On Thursday, however, Kenney — who said he discussed the matter this week with Prime Minister Trudeau — struck a more conciliatory tone.

"I agreed with the prime minister that they need to make sure that they cross every T and dot every I when it comes to discharging the federal government's duty to consult," he said.

"We certainly don't want them having to go back to the drawing board a third time on this. We will continue on our part to build an alliance across the country that supports TMX and other pipelines."

Sohi said consultation teams are continuing to meet with Indigenous communities that could be impacted by the project.

"This process includes engaging in meaningful, two-way dialogue — to discuss and understand priorities of the groups our teams meet and to offer responsive accommodations, where appropriate."

He said the government remains committed to doing "things differently" on the project.

The Liberals are under intense pressure to make progress on Trans Mountain, the only pipeline project the government has approved to date. Ottawa spent $4.5 billion to buy the existing pipeline last year in a bid to overcome political hurdles holding up construction.

Kinder Morgan investors got skittish in the wake of a B.C. court challenge, which aims to determine whether the province can prevent more diluted bitumen from flowing through B.C. given the limited understanding of how the product behaves when spilled in water.

The company halted work last spring, and warned it would cancel the project altogether unless Ottawa could convince it that the delays would not continue. Ottawa bought the pipeline instead, planning to expand it and sell it back to the private sector or Indigenous-owned companies once complete.

The National Energy Board told Sohi a few weeks ago that existing pipeline capacity is both full and running at near-maximum efficiency, meaning the only way for Alberta oil producers to get more product to market is to build new pipelines. Additional rail capacity is possible but not the most efficient way to move oil, the NEB said.