Trudeau to be portrayed on Canuck-themed episode of ‘The Simpsons’ 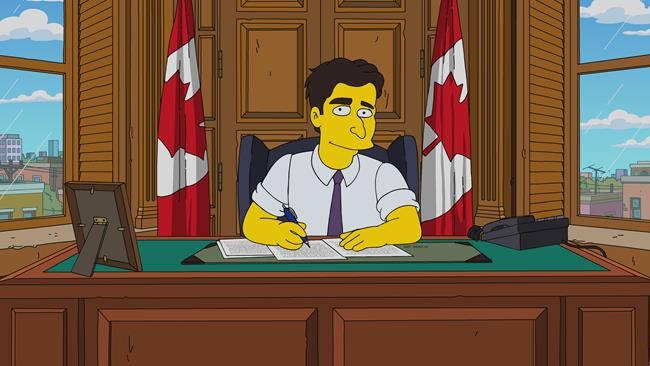 TORONTO — Prime Minister Justin Trudeau will be portrayed in Sunday's Canadian-themed episode of "The Simpsons," which is titled "D'Oh Canada."

Toronto journalist Lucas Meyer revealed on Monday that he got to guest-voice Trudeau for the segment after a video of his impressions of various personalities — including the prime minister — gained traction on YouTube.

Asked if the show reached out to Trudeau to voice himself in the episode, his spokeswoman Chantal Gagnon said in an email: "We respectfully declined their offer."

The episode, which will air on Citytv in Canada, sees Lisa mistakenly given political asylum in Canada during a family trip to Niagara Falls.

Tim Long, a Canadian-born consulting producer on "The Simpsons," told The Canadian Press the Trudeau character briefly talks to Lisa in a scene.

Long added "there may be mention of a current scandal" that Prime Minister Trudeau is involved with, suggesting the episode might touch on the SNC-Lavalin controversy.

"That may be one of those things that nobody in America is going to get," Long, who was born in Brandon, Man., and grew up in Exeter, Ont., said in a recent phone interview.

"It's funny, though, because of course America got used to the idea that, 'Well, Trudeau is great' — at least the liberal part of America has sort of got it in their head that, 'Oh, he's amazing and Canadians must love him' — and I think they're shocked to learn that he's in a little bit of trouble right now."

Meyer, a reporter with radio station Newstalk1010, said he believes the episode will indeed mention the SNC-Lavalin affair, which he called a "bizarre" twist of fate considering he has reported on the scandal and directly asked Trudeau about it in person.

Meyer said he was contacted last September by a casting producer of "The Simpsons" who had noticed his impressions video.

After a phone audition, he got the part and voiced it that month.

The segment was originally scheduled to air this coming September, "but I guess something happened, I'm not quite sure, and they bumped up the episode," he said.

"I'm certainly not the star of the episode. It's a handful of lines. I voiced two scenes. I don't know if they're going to use both," Meyer said Monday in a phone interview.

"But still, to be a part of this show, a show that I grew up with — and not only to be a guest voice but to be playing the prime minister — it's crazy."

Meyer said he hasn't been in touch with Trudeau about the portrayal, but he isn't worried it would affect their relations, noting "there is a way to separate the professional from just having some sort of fun."

"For anybody, there's no malice," Meyer said. "You're also not trying to get any kind of access or anything like that. You're not trying to do it for any positive or negative reasons, really.

"Honestly, this all started with trying to make my friends and family laugh, and I did, so that is what it comes down to."