By Kevin Bissett and Teresa Wright, The Canadian Press — Apr 23 2019 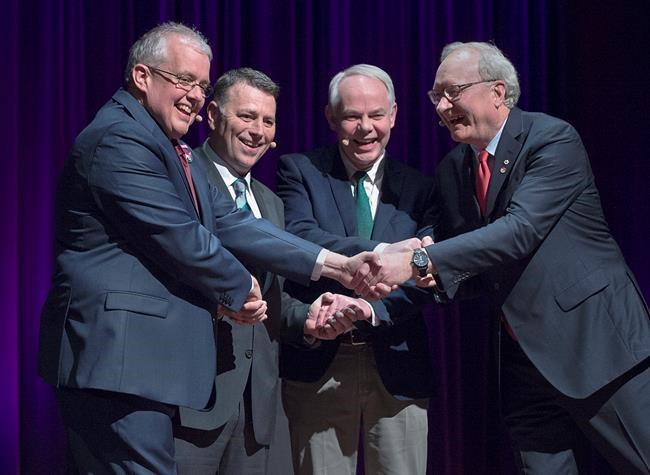 CHARLOTTETOWN — Voters in P.E.I. have shed their century-old embrace of the Island's two-party system, electing a Tory minority government and handing the upstart Green party official Opposition status for the first time.

With all polls reporting Tuesday, the Tories had won 12 seats, the Greens held eight, and the incumbent Liberals, led by Premier Wade MacLauchlan, had won six.

Remarking on the strong showing by the Greens, King said it showed that Island voters want their political parties to work together.

Afterwards, King, who won his riding of Brackley-Hunter River, admitted he was overwhelmed by his party's victory.

"I'm equal parts excited and terrified," he said. "This is a very surreal experience for me. I've come a long way, and the party has come a long way."

The Tories finished with 37 per cent of the popular vote, followed by the Greens at 31 and the Liberals at 29. The NDP received just three per cent. Voter turnout was 77 per cent, a five-point drop from the 2015 election.

The Greens had led in opinion polls since August, prompting speculation they could be poised to form Canada's first Green government.

Still, their strong showing on election night was a major breakthrough for a party that did not hold a seat in the legislature until 2015. That's when party Leader Peter Bevan-Baker won a seat in a general election — after nine unsuccessful runs for office on the Island and in Ontario.

"Islanders responded (to us) by granting us a record number of seats — by far the most seats ever by a Green party in Canada," he told a boisterous crowd at the PEI Brewing Company in Charlottetown.

"I'm a strong believer in the capacity of minority government to create a collaborative environment."

King, a 47-year-old former journalist and consultant, was elected to lead his party only two months ago. The Tories enjoyed a boost in the polls last month, leaving them in a virtual dead heat with the Greens and Liberals as the campaign began.

The Tory victory on the Island represents the latest in a series of gains for right-leaning parties, including wins in Alberta, Quebec, New Brunswick and Ontario — all within the last year.

Earlier this year, the Island's Progressive Conservatives were largely regarded as a dysfunctional organization, having churned through no less than six leaders in the past eight years.

Despite past infighting within Tory ranks, King was lauded for running a solid campaign, mainly by reinforcing a relentlessly positive message — a tried-and-true tactic among Island politicians.

A former communications director for former Tory premier Pat Binns, King performed well on the hustings and in a series of decidedly polite leaders debates.

However, the rookie leader's run for office was marred by a mild controversy over a series of tweets that were supposed to be funny, but instead offended some, who criticized them for being sexist and homophobic.

King, who also describes himself as a comedian and story-teller, admitted that some of the tweets were inappropriate.

Among other things, King promised to expand beer and wine sales to convenience stores.

Access to family doctors emerged as a key issue in the campaign. All four parties talked about recruiting more physicians. According to Health PEI, there are 13,083 Islanders on the waiting list for a family doctor

The Greens' rise in popularity generated a national buzz during an otherwise lacklustre campaign.

During the race, Bevan-Baker — a Scottish-born dentist — tried to persuade Islanders that the Greens care about more than just the environment, offering a platform that focused on a range of social issues, including a pledge to raise social assistance rates.

The Liberals were seeking a fourth term in office, having repeatedly reminded Islanders that the province's economy remains the strongest in the country.

MacLauchlan, 64, failed to win his seat.

"It's simple: the tide turned. We've had four years of good government, responsible government and exceptionally good management of the province's finances," he told reporters.

It wouldn't be a stretch to say P.E.I. is on a tear, posting impressive numbers for higher wages, employment, immigration, housing starts, exports, retail sales and tourism.

However, voters appeared reluctant to give MacLauchlan credit for boosting the economy, a sentiment that was reflected in his relatively low personal popularity ratings.

The Island's New Democrats, led by 57-year-old Joe Byrne, were not in contention in any ridings.

When the legislature was dissolved, the Liberals held 16 seats in the 27-seat legislature, the Tories had eight and Greens had two seats. There was one Independent.

A total of 14 seats are needed for a majority, but only 26 of the 27 seats were contested Tuesday.

On Saturday, Elections P.E.I. postponed the vote in the district of Charlottetown-Hillsborough Park following the deaths of Green party candidate Josh Underhay and his young son in a boating mishap on the Hillsborough River.

Bevan-Baker began his address to supporters with an emotional tribute to Underhay. "I don't think I've ever felt so overwhelmed by joy and grief simultaneously," he said.

A byelection will be held in the riding within the next three months.

Aside from the election outcome, voters cast ballots in a referendum on electoral reform. Preliminary results suggested they had declined to endorse the switch to proportional representation, though the results were close.

Note to readers: This is a corrected story. An earlier version reported that the Greens had won nine seats and the Liberals five.