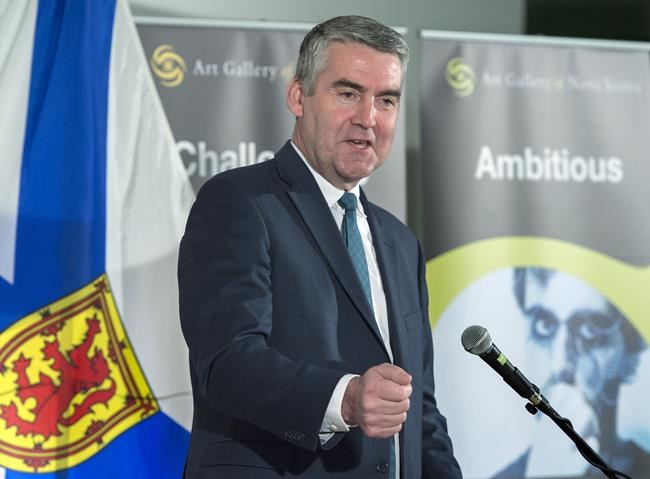 HALIFAX — Nova Scotia has turned its trade focus to growing its European exports through a new strategy that builds on successful efforts to boost trade with China.

Premier Stephen McNeil said Thursday that although the Nova Scotia-Europe Engagement Strategy sets no targets, the idea is to grow trade and investment opportunities with the European Union, which is the province's third largest export market after the United States and China.

McNeil said there is an opportunity to expand ties established through the Comprehensive Economic and Trade Agreement (CETA) which came into force in 2017, despite the current unrest between the European Union and Great Britain over Brexit.

"We know that is a challenging situation for those going in, but that is not a reason to stay away," he said. "Potentially we will have two marketplaces to deal with, but we can do that."

In 2018 Nova Scotia exported $597-million worth of goods to Europe including seafood, berries, wood and energy products.

However, the European market has remained relatively flat over the last 10 years, accounting for between nine and 12 per cent of Nova Scotia's international exports, according to the province.

McNeil said while his government will do what it can to smooth the way, it's up to the province's companies to seize opportunities.

"Without you this doesn't work," he said. "With you I think we'll surpass even our wildest dreams about the potential for this relationship to continue to grow."

The government said the strategy will look to increase exports through research and development partnerships, immigration, tourism revenue, and investment.

Meanwhile, McNeil said he will lead a trade mission between April 29 and May 15 that will include stops in Ireland, Holland, Portugal, Belgium, and France before moving on to Guangdong province in China.

A similar strategy to grow trade in China was launched in 2016.

At the time the government said exports to China totalled $420-million in 2015. Last year those exports reached a new high of $794-million.

Jean-Paul Deveau, president and CEO of Acadian Seaplants, was on hand Thursday to stress the importance of increasing trade in a province with a small and aging population.

"How are we going to have an economy that's going to allow us to pay for hospitals and schools? So what we have to do is we have to do more with less, and this is where exporting high value goods and services is so important to the economy of Nova Scotia."

Deveau's bio-tech company is the largest independent manufacturer of seaweed-based products in the world and currently exports to more than 80 countries. It operates six processing facilities in Atlantic Canada, Ireland and Scotland.

He said on a recent trip to Paris he was able to negotiate a new five-year deal with his company's largest customer in France. In addition, Deveau said the company is on the verge of a deal to buy another company in the United Kingdom.

"Those acquisitions gives us critical mass and allows us to be competitive globally," said Deveau. "The bigger that we get, the easier it is to fend off that competition."

According to the province, Nova Scotia's top export markets in Europe are the U.K., France, the Netherlands, Germany, Belgium, Denmark and Spain.

"We need to make sure that companies that haven't grown at the rate they (Acadia Seaplants) have recognize that this marketplace is now even more attractive than it was with the tariffs that have come off."

He said it's a question of putting companies in a position to "capitalize on that huge market."