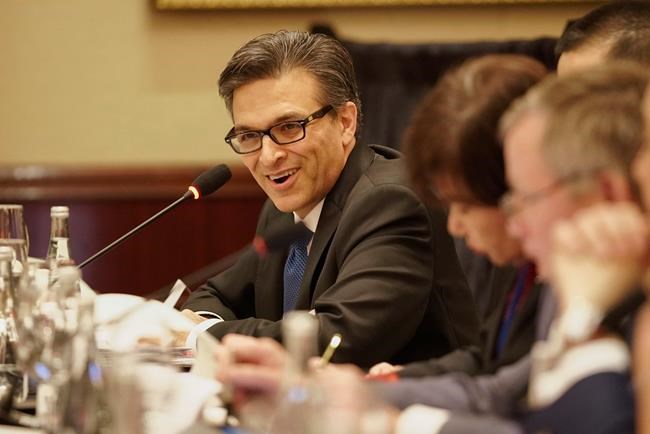 OTTAWA — Big business leaders worried about Canada's aging demographics have been urging political parties to avoid inflaming the immigration debate ahead of this fall's federal election.

The head of the lobby group representing chief executives of Canada's largest corporations said he's already raised the issue with political leaders who are shifting into campaign mode for the October vote.

With signs of public concern about immigration, Business Council of Canada president and CEO Goldy Hyder said he's promoted the economic case in favour of opening the country's doors to more people.

"We are 10 years away from a true demographic pressure point," Hyder said during a meeting with reporters Thursday in Ottawa. "What I've said to the leaders of the political parties on this issue is, 'Please, please do all you can to resist making this election about immigration.' That's as bluntly as I can say it to them."

The message from corporate Canada comes at a time when public and political debate has focused on immigration, refugees and border security, to the point it could emerge as a key election issue, tempting parties fighting hard for votes.

A poll released this month by Ekos Research Associates suggested that the share of people who think there are too many visible minorities in Canada is up "significantly," even though overall opposition to immigration has been largely unchanged in recent years and remains lower than it was in the 1990s.

As the baby-boomer generation ages, experts say Canada — like other western countries — will need a steady influx of workers to fill jobs and to fund social programs, like public health care, through taxes.

Thanks to the stronger economy, Canadian companies have already been dealing with labour shortages. Healthy employment growth has tightened job markets, making it more difficult for firms to find workers.

"Every job that sits empty is a person not paying taxes ... We have job shortages across the country and they're just not at the high end," said Hyder, who added his members are well aware that immigration has become a tricky political issue.

"We're worried about that in the sense that the public can very easily go to a xenophobic place."

"The fact we've got people that are buying things, that are using services, that are going to stores, that need houses — well, that creates a little bit of a boost to the economy," Wilkins told a news conference in Ottawa when asked about the subject. "Certainly, immigration is a big part of the story in terms of potential growth, which will feed itself into actual growth."

Hyder said he's personally part of a group called the Century Initiative, which would like to see Canada, a country of about 37 million, grow to 100 million people by 2100.

The group was co-founded by Hyder and several others, including two members of the Trudeau government's influential economic advisory council — Dominic Barton, global managing director of consulting firm McKinsey & Co., and Mark Wiseman, a senior managing director for investment management giant BlackRock Inc. Hyder was a business consultant before joining the business council and was once a top aide to federal Progressive Conservative leader Joe Clark.

The Century Initiative wants Canada to responsibly expand its population as a way to help drive its economic potential.

"Demographics are not going to be relying on just making babies, we're going to need immigration," Hyder said. "We have to be able to communicate that from an economic perspective, but cognizant of the social concerns that people have."