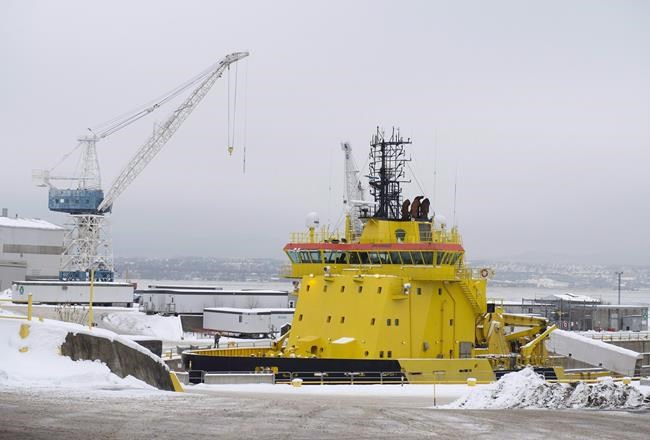 OTTAWA — The federal government is awarding Davie Shipyards a contract worth more than $7.1 million to refit the Canadian Coast Guard's largest icebreaker.

The refit of the CCGS Louis S. St-Laurent is the latest contract awarded to Davie amid complaints from the Quebec shipyard about a lack of work.

Davie is leasing a converted civilian ship to the navy as a temporary supply vessel and has been pressing the government to accept a second such vessel for around $500 million.

It also wants to be included in the government's multibillion-dollar shipbuilding strategy, through which Ottawa is contracting rival shipyards in Halifax and Vancouver to build dozens of new ships.

The government has said the navy does not need another interim supply ship and has instead been handing Davie maintenance and refit contracts for existing coast-guard and naval vessels.

It is also buying three second-hand icebreakers from Davie, which the shipyard has started to convert for the coast guard and which will likely remain in service for the next 15 to 20 years.

The contract announced Tuesday is being awarded without a competition and will see Davie put the Louis St-Laurent in drydock.

"Canadians from coast to coast to coast rely on the Canadian Coast Guard to protect their coastlines and their livelihoods," Public Procurement Minister Carla Qualtrough said in a statement. "This contract will ensure the men and women of the Canadian Coast Guard are properly equipped to do their important work, while also helping sustain good middle-class jobs at the Davie Shipyard."

Recent briefing notes obtained by The Canadian Press through access-to-information law indicate Davie is the only shipyard big enough to drydock the icebreaker.

First launched in 1966, the 53-year-old vessel was once supposed to be decommissioned in 2000 but has since undergone several rounds of upgrades and refits to keep it in the water.

Seaspan Shipyards in Vancouver has been tapped to build its replacement, the CCGS John G. Diefenbaker, but the project has experienced numerous delays and its delivery date is up in the air.

It wasn't immediately clear how many jobs the latest contract will create at Davie, which says it has been forced to lay off hundreds of workers over the past few years.