By Kristy Kirkup and Jordan Press, The Canadian Press — Apr 30 2019 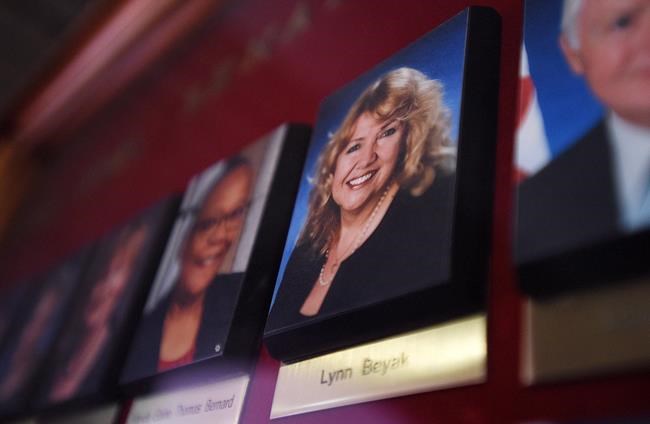 OTTAWA — The Senate's ethics committee recommended Tuesday that Sen. Lynn Beyak be suspended without pay over incendiary letters about Indigenous Peoples she posted to her website.

The committee is also recommending Beyak attend educational programs at her own expense related to racism toward Indigenous people in Canada, have the Senate's administration remove the five letters from her website if she won't remove them herself, and make Beyak apologize to the upper chamber in writing.

The recommendations follow a March report from the Senate's ethics officer, Pierre Legault, who found the Ontario senator breached two sections of a code of conduct for senators by posting racist letters on her Senate website.

The letters are part of an effort Beyak has made to promote the positive side of residential schools for Indigenous children.

The government-sponsored religious schools, which operated from the 19th century until 1996, were meant to assimilate Indigenous children into European-Canadian culture. In so doing, they deprived children of connections to their homes and families. Many were subjected to physical, psychological and sexual abuse, and several thousand died.

Legault found that while a senator is entitled to encourage historical debate, the letters of support she posted "are rife with stereotypical negative beliefs, assumptions and prejudices directed at (Indigenous people)." He said Beyak should take the letters down and apologize.

The ethics committee wrote that suspending Beyak without pay would help her "gain further perspective on the privilege of serving in Canada's upper house." Cutting off access to her Senate resources, including her office and expense account, would "foster a greater appreciation of those resources and the attendant expectations for their appropriate use," the report said.

"It's a reasonable report, it's a reasonable set of recommendations and most senators are reasonable," said Sen. Murray Sinclair, who chaired the Truth and Reconciliation Commission that documented the legacy of the residential school system. "For the good of the Senate and reputation of this institution, I think we need to look carefully at what the committee recommended and go forward with that."

"This is really important and we await the decision of the chamber," Bennett said Tuesday. "They did an important piece of work and finding that those racist letters will have to come down."

Beyak could not immediately be reached Tuesday. She was appointed as a Conservative but the party kicked her out of caucus more than a year ago over the letters.

Conservative Sen. Raynell Andreychuk, the committee chair, said the panel was troubled by Beyak's failure to acknowledge the letters were racist and disturbed by her unwillingness to recognize the harm caused by posting them.

Beyak's actions fell short of what were expected of a senator, she said in presenting the report to the Senate. As parliamentarians, senators hold a unique public office that requires them to confront racism without reservation to ensure the integrity of the institution, Andreychuk said.

"The Senate as a house of Parliament must defend the principle that all persons are equal in law and in dignity," she said. "The suitability of a senator to remain in the legislature is linked to the recognition and respect of this principle."

Further discussion was put on hold for another sitting day, but the upper chamber has shown a recent inclination to dispose of these matters quickly once they reach the floor of the Senate.

The last senator to face the wrath of the ethics committee to this degree was Don Meredith, who resigned in disgrace in May 2017 before the Senate was ready to vote on a recommendation that he be expelled from the upper chamber over an explosive ethics officer's report about his sexual relationship with a teenage girl.

Any decision by the Senate would only be in effect until Parliament dissolves, which will happen by the fall with the official start of the election campaign. That was the case with three senators — Mike Duffy, Patrick Brazeau and Pamela Wallin — who were suspended without pay in 2013 until the election call in the summer of 2015.

Andreychuk said Tuesday that if Beyak didn't comply with the Senate's wishes, senators returning after the election should address her refusal as a continued breach of the conflict-of-interest code.