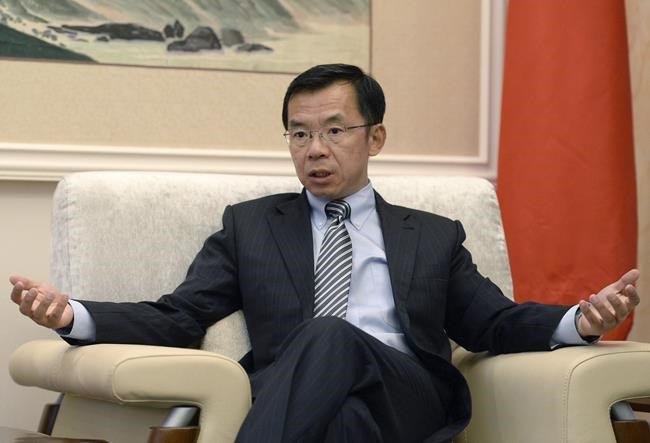 OTTAWA — China's ambassador to Canada says the bilateral relationship is now at "rock bottom" compared to any time since diplomatic ties were first established decades ago.

In prepared text for a speech Thursday, Lu Shaye said he's saddened Canada-China relations are at what he called a "freezing point."

Lu's remarks come at a time of heightened tensions following the December arrest of Chinese telecom executive Meng Wanzhou in Vancouver on an extradition request by the United States.

The Huawei executive's arrest has enraged China, which has since detained two Canadians on allegations of endangering Chinese national security, sentenced two Canadians to death for drug-related convictions and blocked key agricultural shipments.

Lu did not mention Meng's arrest — but he said the China-Canada relationship is now facing serious difficulties.

He said China has long valued its relationship with Canada, particularly since it was one of the first Western countries to establish diplomatic ties with the Asian country.

"For clear reasons, the current China-Canada relations are facing serious difficulties and are situated at the rock bottom since the two countries have established diplomatic relations," said a copy of Lu's speech, which was posted on the Chinese Embassy's website.

"It saddens us that the current China-Canada relations are 'at a freezing point' and face huge difficulties. The knots shall be untied by those who got them tied."

He continued by urging Canada to view China's development in a "fair and objective" manner and to respect its concerns. Lu also warned Canada to "stop the moves that undermine the interests of China."

In recent months, Beijing's envoy has used strong words when talking about the relationship. In January, he told Canadian journalists that Meng's arrest was the "backstabbing" of a friend and said it was evidence of white supremacism.

He made the remarks in Toronto at an event hosted by the Globe and Mail. The document said former prime minister Jean Chretien was in attendance as was Darryl White, chief executive of BMO.