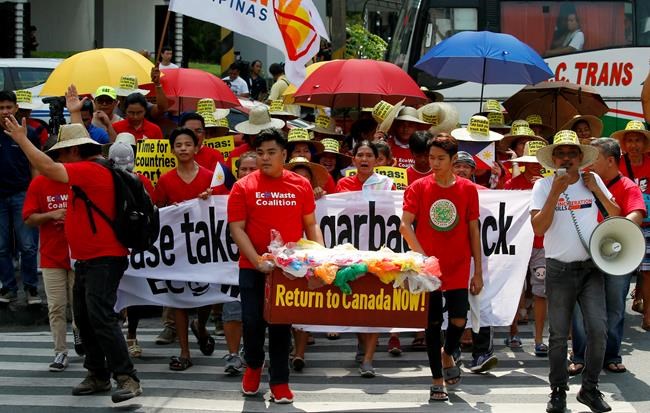 OTTAWA — The Philippines has rejected Canada's late-June timeline for repatriating its garbage and is moving forward with plans to ship it back to Canada itself.

Presidential spokesman Salvador Panelo told a media briefing in Manila Thursday that Canada's timeline isn't good enough and that the Philippines government will have 69 containers of mislabelled Canadian trash headed back across the Pacific no later than next week.

Earlier this week Panelo said President Rodrigo Duterte had ordered the containers dumped in Canadian waters after Canada missed Duterte's May 15 deadline to deal with the nearly six-year-old dispute.

"The trash will be sent back the soonest," Panelo said in Tagalog. "This week or a week after. Definitely not the end of June."

"We will not allow ourselves to be a dumping ground of trash."

Environment Minister Catherine McKenna said Wednesday Ottawa has contracted the Canadian office of the French shipping giant Bollore Logistics to treat the waste and then bring it back to Canada before the end of June. Environment officials say the containers must be fumigated in the Philippines before being loaded onto a ship.

McKenna's press secretary, Sabrina Kim, said Canada is "fully engaged" with the Philippines to "promptly remove the waste to Vancouver for disposal."

The contract with Bollore is worth $1.14 million but the Philippines says it will pay to ship the trash back just to get it out of the country.

The containers are the remainder of 103 shipping containers sent to the Philippines by a Canadian company in 2013 and 2014, falsely labelled as plastics for recycling. Philippine authorities were alarmed that the amount of material was more than the Philippine importer could process, and ordered an inspection, finding the containers to be filled mostly with regular garbage rather than any material that could be recycled.

Canada and the Philippines have battled since 2014 about what to do with the contents. The Philippines has recently recalled its ambassador and consuls general until Canada deals with the waste.

Several environment groups in both Canada and the Philippines argue Canada violated the Basel Convention, an international treaty designed to prevent wealthier nations from using developing countries as trash heaps.

The Canadian company that shipped the waste, Chronic Inc., has since gone out of business; while officials say they would like to try to go after it to get some of the costs back, that is proving difficult. Chronic Inc. is not believed to have violated any Canadians laws when it shipped the waste.

Before 2016, Canada's regulations under the Basel Convention only stipulated that the convention applied to shipments Canada considered hazardous. Canada did not then, and still does not, consider the waste to be hazardous. The Philippines does.

As a result of this case, Canada changed its regulations to prevent this kind of situation from recurring. Now exporters must obtain permits from Environment and Climate Change Canada to ship waste if either Canada or the importing nation deems it to be hazardous.

Garbage-filled containers are not all that rare, with the Philippines dealing with another such shipment this week from Australia. Reports from Manila say seven containers of garbage are now being rejected by the Philippines. That garbage was to be burned for energy in the Philippines but the country says that violates its clean-air laws.

Last year South Korea took back containers of trash that had ended up in the Philippines in just a matter of months, drawing negative comparisons for Canada, which sat on its hands for almost six years.

Duterte has also hinted at following China's move to bar plastic recycling imports entirely. China used to be the biggest importer of recyclable plastics but in 2018 barred most shipments because too many of them were contaminated with materials that could not be recycled.