System for picking N.S. bridge repairs and replacements too loose:auditor 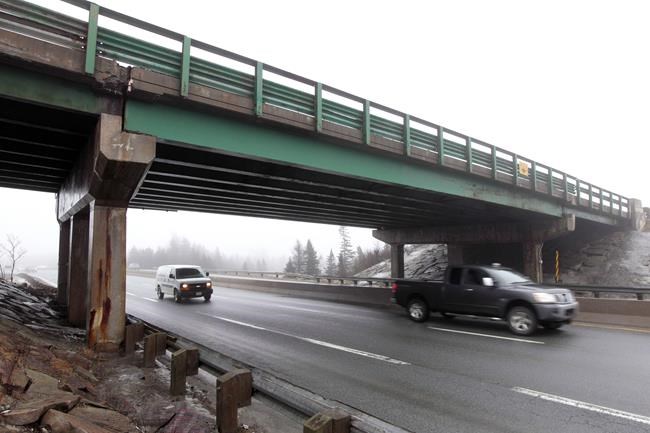 HALIFAX — Nova Scotia is doing an inadequate job choosing which of its aging bridges are most urgently in need of repair or replacement, the province's auditor general says.

In an audit report released Tuesday, Michael Pickup found the Transportation Department isn't providing its managers with the information needed to make decisions about fixing, maintaining and building new bridges.

Figures in his report indicate over 600 of the province's 4,200 bridges are in poor condition, and need to be fixed or replaced.

"This is troubling given the department operates in an environment where it must make the best use of limited funding," said Pickup.

"Without defined selection criteria it is hard for the department to know if they are picking the right bridges to work on."

The department has estimated it needs $2.1-billion over the next 10 years to get all of its bridges to a sustainable condition.

Pickup pointed out that would require $210-million a year and current spending is only about $45 million, meaning it could take about 200 years to do the required work.

Given the financial resources available, Pickup's report says the department should choose to reduce the number of bridges requiring replacement "by identifying bridges which are in close proximity to each other to determine if this is the most efficient use of limited resources."

"These numbers make it clear the department needs to make careful decisions on which bridges should receive attention first," the report states.

However, the report says there is no process to centrally record work completed on bridges even though the department's information system is capable of recording maintenance history. He added staff were also not "clearly or consistently" documenting recommended work resulting from their inspections.

"This means there is no centralized, easily accessible, permanent record of repairs recommended from each inspection," Pickup says.

The audit also found that while the department is appropriately overseeing whether bridge projects meet standards during construction, it is failing to properly monitor warranties.

"This matters because it exposes the province to potentially spending more money down the road when a warranty claim is missed," Pickup said.

Pickup's report contained figures from the department's January 2019 draft needs assessment which indicated just over half, 51 per cent of the province's bridges, are rated in good condition, with 34 per cent considered fair and 618 rated in poor condition.

Auditors identified 75 of 2,100 bridges in the central and western areas of the province that were in poor condition and the report said they were able to get information that was satisfactory on 72 of them. However, there wasn't a satisfactory explanation for the remaining three, which the report declined to name.

"This is the sort of situation that can occur when there is no sufficient information available to allow criteria-based evaluation to support decision making," says the report.

Peter Hackett, chief engineer for the Transportation Department, said there are currently engineers in the field who assess the state of bridges and it's a system that works well.

"The issue is we could have a better software system that would give us better criteria, so I agree with what he (Pickup) is saying there," said Hackett.

Although Hackett said the department is looking into new information software, he couldn't say when more automation would be introduced to the system.

Tuesday's report also looked at the province's Worker's Compensation Board and found the board often takes too long to make decisions on workers' claims although it adheres to policy.

"So while we found that the WCB makes decisions in line with program requirements, there's much work left to be done to improve how it deals with injured workers in Nova Scotia," said Pickup.

The audit testing found that over half the time workers failed to receive written claim decisions within 30 days, or communication about the calculation of their benefits. It also found that several workers appeals weren't processed within the board's 90-day target and that on average the appeals cases took 50 business days to assign to staff.

Pickup also expressed concerns over privacy breaches in nine of 20 cases tested, where employers inappropriately received sensitive private medical information that was not claim related. Those included medications the worker was taking and information on past illnesses and injuries.

The report made 12 recommendations for improvement that were accepted by the board.

"I understand and appreciate that the decisions we make, the time it takes us to make them, and our protection of personal information all have a very real human impact," MacLean said in a news release.

"These things matter to Nova Scotia workers and their families."