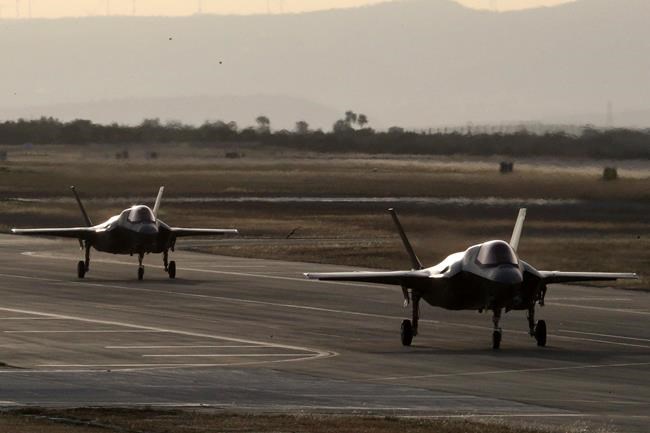 OTTAWA — The federal procurement minister is defending the government's plan to loosen procurement rules for the F-35 stealth fighter in the face of questions and concerns from companies that make competing jets.

Speaking at the annual Cansec arms-trade show Thursday, Public Procurement Minister Carla Qualtrough insisted the move is needed for a robust competition to replace Canada's aging CF-18s. That competition is expected to result in a $19-billion deal for a new fleet of fighters.

"The innovations and modifications we are adopting will enable participation from all eligible suppliers while applying the same rules to everyone on a level playing field," Qualtrough said during a breakfast speech.

"This is a complex process. As complex as any the federal government has ever conducted."

The government's plan involves lifting a long-standing requirement that companies legally commit to putting some of their contract money back into Canadian industry if they win a defence competition.

The proposal followed U.S. complaints that the requirement violated an agreement Canada signed in 2006 to become one of nine partner countries in the development of the F-35, which is being built by Lockheed Martin.

While partner countries can buy F-35s at a discount, they must also contribute money to the planes' development — in Canada's case, more than $500 million to date.

Partners are also forbidden from requiring economic benefits as a condition for buying the plane. Companies in each partner country instead compete for contracts associated with the aircraft, with Canadian industry having won $1.5 billion so far.

And they warned abandoning the requirement that bidders commit to reinvesting in Canada could hurt the country's aerospace industry, which would in turn make it more difficult for the military to support its new jets.

Industry sources say representatives for the Eurofighter Typhoon, the fourth aircraft expected in the competition aside from the F-35, Super Hornet and Gripen, have expressed similar sentiments.

Qualtrough, offering the government's most extensive defence of the plan to date, insisted that despite letting bidders choose not to make contractual obligations to re-invest, the government is committed to ensuring the largest economic benefits possible.

Under the new process, bidders can still guarantee that they will re-invest back into Canada if their jet wins the competition and get full points — which is the likely approach for Boeing, Saab and Eurofighter.

Those like Lockheed Martin that can't make such a commitment will be penalized and asked to establish "industrial targets," lay out plans for achieving those targets and sign a non-binding agreement promising to make all efforts to achieve them.

"No one should misunderstand this: our government remains committed as strongly as ever to the (industrial benefit) policy in this competition," Qualtrough said during her speech.

"We're getting the fighter jet for the RCAF's needs, at the right price, and with the right economic benefits for Canadians."

The government has said it plans to launch the long-overdue formal competition to select Canada's next fighter jet in July, nearly four years after the Liberals were elected in 2015 on a promise to hold an immediate competition.

Companies are expected to submit their bids next winter, with a formal contract signed in 2022. The first plane won't arrive until at least 2025.