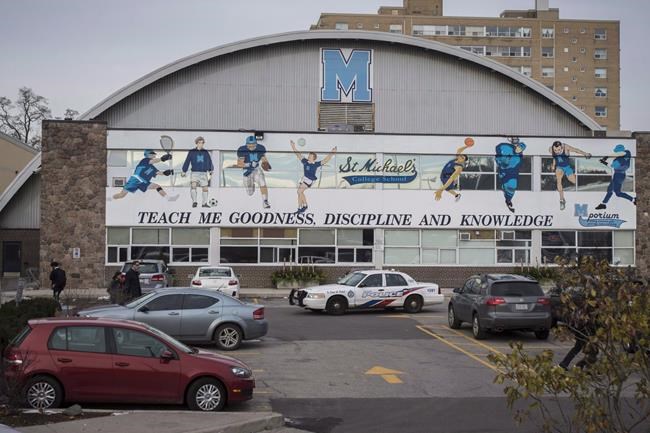 TORONTO — An independent committee tasked with investigating systemic cultural issues at a prestigious private school in Toronto has recommended the school's football team be reinstated this fall so long as the institution takes steps to address bullying.

St. Michael's College School, an all-boys Catholic institution, announced in November it would undergo a "comprehensive review of student culture" after a number of alleged incidents came to light.

Seven students were charged in the alleged incidents, which police say took place on school grounds during the fall term and involved members of the football team.

St. Michael's previously announced it was suspending its varsity basketball team for the current season and its football program for both the current and the next school year. In January, it moved to reinstate the basketball team.

On Wednesday night, the school's independent "respect and culture" review committee held a town-hall meeting with parents, students, teachers, coaches, administrators and other staff to present its interim results.

In prepared remarks, committee chair Mark Sandler told the meeting the junior football team should be reinstated in September, "if and only if certain important and necessary measures are put in place to promote the safety of those involved."

The committee also presented the results of surveys it conducted with students, alumni, teachers and parents, including 1,010 current students at St. Michael's.

It found that 22 per cent of boys surveyed at the school reported being bullied, while 57 per cent reported witnessing bullying. Of those surveyed who either experienced or witnessed it, the majority reported associated distress.

Sandler said the report reveals that bullying is a "systemic issue that must be addressed," and he promised the committee's final recommendations — due this summer — will address it.

In the meantime, he said, there is some "time sensitivity" to the committee's recommendation that the football team be reinstated.

"We are satisfied that in the upcoming year, the reinstatement of the football programs, if and only if it is coupled with effective measures to prevent or address hazing in particular and bullying more generally, can better serve the student body while promoting a safe and healthy environment within the school," Sandler said.

Toronto police have said two of the incidents that led to charges were alleged sexual assaults, while the third was an alleged assault. The cases have been put over to June 14 and June 27.