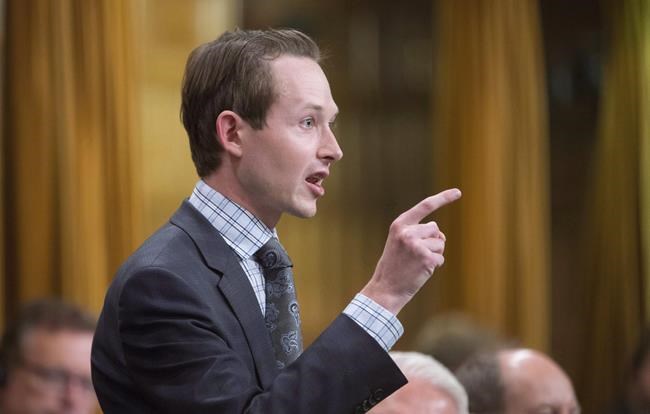 Edmonton Centre MP Randy Boissonnault says Scheer's decision to remove Cooper from the committee that held the hearing, but not from caucus, shows there's a "revolving door" for bigots in the Conservative party.

During a May 28 meeting on the topic of online hate, Cooper quoted from the manifesto of the man charged with the mass murder in Christchurch, New Zealand in March.

Cooper also named the man, though media and public figures are increasingly trying to deny celebrity to attackers by omitting their names from coverage.

Cooper was responding to testimony from a Muslim witness, Faisal Khan Suri, who told the committee the man responsible for the 2017 attack on a mosque in Quebec City consumed content from "anti-immigrant, alt-right and conservative commentators."

Suri said the man alleged to have carried out the attacks in Christchurch, which left 51 people dead, was influenced by similar content.

"I take great umbrage with your defamatory comments to try to link conservatism with violent extremist attacks," Cooper told Suri. "They have no foundation, they're defamatory, and they diminish your credibility as a witness."

The Conservative MP, who represents St. Albert-Edmonton, released a statement on Facebook Saturday apologizing for the incident, calling it "ill-advised."

"I absolutely should not have quoted these words nor named the perpetrator. This was a mistake," Cooper said. "I apologize to Mr. Suri and to all Canadians. I reiterate that I unequivocally condemn all forms of racism."

A short while later, Scheer released a statement on Twitter saying he had spoken to Cooper and they had agreed the MP would no longer serve on the justice committee. Scheer called the incident "insensitive and unacceptable."

The Tory leader added that he had accepted Cooper's apology and considered the matter closed.

"Mr. Cooper is a good person who made a mistake, and has taken responsibility, and apologized while denouncing hateful rhetoric," he said Monday, in a statement relayed through a spokesman. He condemned Boissonnault for "trying to score cheap political points off of a terrible tragedy" and pointed out that Liberal MPs have crossed the line on social media without serious consequences.

"The only thing that gets you kicked out of the Liberal party is speaking the truth about Justin Trudeau's involvement in the SNC-Lavalin corruption scandal," Scheer concluded.

Suri also called for Cooper to be kicked out of the Conservative caucus.

Boissonnault said Monday that given there are only three weeks left in the parliamentary session, removing Cooper from committee was a "woefully inadequate"and "insufficient" response from Scheer.

Cooper's actions in the committee meeting came the same day Scheer gave a speech in which he said bigots are not welcome in the Conservative party, saying "there's the door" to anyone who believes race, religion, gender or sexual orientation makes them superior.