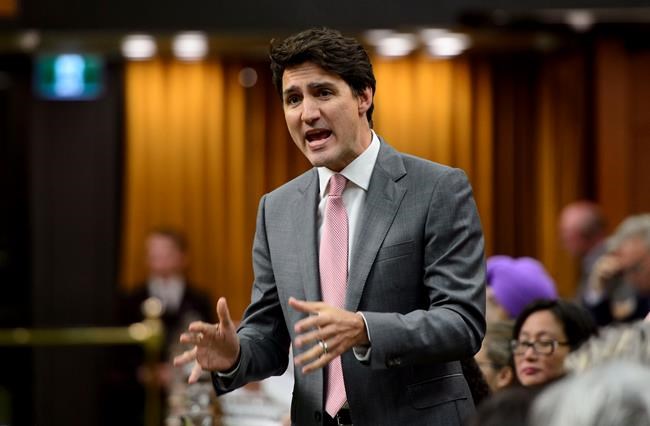 OTTAWA — Prime Minister Justin Trudeau says it is "absolutely irresponsible" for conservative premiers to threaten to tear Canada apart if the government doesn't accept all the Senate's amendments to new environmental-assessment legislation.

The Liberals are expected to say as early as Wednesday what they want to do with the 187 amendments made to Bill C-69 in the Senate last week. The bill would revamp the way the federal government evaluates major infrastructure projects, from pipelines to interprovincial highways.

The conservative premiers in Alberta, Saskatchewan, Manitoba, Ontario and New Brunswick, and the non-partisan premier of the Northwest Territories, wrote an "urgent" letter to Trudeau Monday telling him that he must accept every last one of the amendments or he will be threatening national unity.

They say Bill C-69 will make it virtually impossible to ever build another major pipeline in Canada and will drive away jobs and investment in the energy sector.

The premiers also want him to scrap Bill C-48, which would put a permanent ban on oil tankers' loading at ports in British Columbia north of Vancouver Island.

Trudeau lashed out at the premiers when the letter was raised by deputy Conservative leader Lisa Raitt during question period.

"Will the prime minister do the right thing, consider the amendments from the Senate and agree to every single one of them?" she asked.

Trudeau said the government is happy to accept amendments that make the bill better and are in the best interests of the country.

"What we will not do is accept the premiers' saying 'There is a threat to national unity if we don't get our way,' " Trudeau said. "That is not the way to hold this country together."

Alberta Premier Jason Kenney was not impressed, saying the premiers signed the letter "in the best tradition of co-operative federalism."

"We only asked to be heard, and this dismissive response from the federal government is the real threat to the national economy and to national unity," he said in a tweet.

Raitt said the premiers were warning about national unity but that they did so as premiers representing a majority of Canadians.

Trudeau said for the first time that at least one of the Senate's amendments, which he says makes Indigenous consultation "optional," is a no-go.

"I don't think Canadians want to go back to Stephen Harper's years of ignoring Indigenous Peoples in how we build resource projects. That's a good way to get nothing done, the way Stephen Harper did over 10 years."

The federal cabinet considered the issue at its weekly meeting Tuesday and a motion listing which amendments the government will accept and which ones it won't could be tabled for debate in the House of Commons as early as Wednesday.

Bill C-69 fulfils a Liberal election promise to redo the way major national projects are assessed; Trudeau has said previous changes made by the Conservative government in 2012 led only to court challenges. Among the new changes are:

— creating a new Impact Assessment Agency to conduct the reviews,

— limiting the influence of regulators like the National Energy Board in project approvals, and

— requiring the reasons for an approval or denial to be made public, including any science used to reach the conclusion.

Trudeau is under intense pressure from environment groups to reject almost all the Senate amendments, which the groups say are directly taken from the demands of the oil and gas sector and cut into the bill's attempts to balance protecting the environment and economic growth.

Environmental Defence, Greenpeace Canada and the West Coast Environmental Law Association say the amendments weaken the requirement to consider a project's impact on climate change, reduce the ability of the public to participate in assessment hearings, and limit the right to ask a court to review a project approval.

That last change is also of concern to law professors, at least 50 of whom penned a letter to Environment Minister Catherine McKenna Tuesday saying it would undermine access to justice, and therefore public trust.

"Canadians must be assured that, when there has been a legal error in the exercise of public duties, they can bring their case to a court without undue expense, impediments and burden," the law professors said.