Canada resettled more refugees than any other country in 2018, UN says 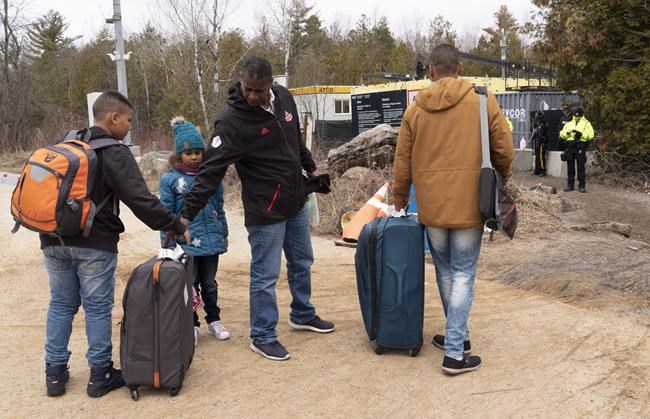 OTTAWA — As the number of displaced people worldwide reaches modern highs, new figures show Canada resettled more refugees last year than any other country and had the second-highest number of refugees who gained citizenship.

The United Nations High Commissioner for Refugees' latest report shows the number of people fleeing war, persecution and conflict has exceeded 70 million — the most since the Second World War.

About 1.4 million refugees were in need of resettlement in 2018 but only 92,400 refugees were actually resettled, in 25 countries.

The data also shows Canada gave citizenship to the second-largest number of people who had arrived as refugees — a figure that helps to measure how well countries are integrating refugees. A total of 18,000 refugees became Canadian citizens last year, a substantial increase over 2017, when just over 10,000 refugees were naturalized. The number had been declining over time.

Michael Casasola, a senior resettlement officer with the UN refugee agency's operation in Canada, says Canada has been a leader in welcoming refugees and giving them opportunities to thrive.

He pointed to Canada's private sponsorship program, which accounts for two-thirds of Canada's resettled refugees. By offering community-based supports that come directly from citizens and charitable organizations, refugees who arrive through this program achieve better outcomes and become better integrated into their communities than government-sponsored refugees.

"Canada's approach to integration works. It encourages integration, it welcomes refugees to become part of Canadian society, including obtaining citizenship, and among all the immigrants who come to Canada, refugees have the highest (citizenship) uptake," Casasola said.

The picture hasn't been all rosy. An influx of "irregular" asylum seekers crossing into Canada using a forest path between New York state and Quebec has become a divisive political issue, with conservative politicians often referring to these individuals as "queue-jumpers" and "illegal" migrants.

The UNHCR report shows Canada was the ninth-largest recipient of new asylum-seekers in 2018, with 55,400 claims filed. Over 19,000 of those were from people intercepted by the RCMP for crossing "irregularly" into Canada.

While these numbers represent an overall increase in the number of asylum seekers to Canada — a situation that has led to major backlogs in processing claims and problems finding housing for asylum-seekers in Montreal and Toronto — the UNHCR figures show Canada's experiences are nothing compared to the waves of refugees flocking to other countries. There they await processing and possible resettlement elsewhere.

"Only 16 per cent of the world's refugees are in developed states," Casasola said.

"The reality is the vast majority of refugees are in front-line countries. So we always have to be careful in certain discourse globally in terms of trying to present that somehow we're inundated when other countries bear much larger responsibilities that they take on when refugees cross their border."

Turkey hosted the largest number of refugees worldwide, with 3.7 million people in 2018, while Pakistan saw 1.4 million and Uganda 1.2 million.

The main country of origin for refugees in 2018 was Syria, with 6.7 million Syrians having fled across a border at the end of the year; and while these refugees were hosted by 127 countries on six continents, the vast majority  — 85 per cent — remained in countries in the Middle East.

Casasola said he is concerned about a rise in harsh language about asylum seekers in Canada and in other countries. With immigration likely to be a major issue on the campaign trail in the federal election this fall, he said he hopes this trend doesn't continue.

"It's disconcerting when we hear a negative narrative around refugees when, in fact, we know that Canada has been a successful model in terms of how to receive and integrate refugees," he said.

"We're always worried that refugees somehow become a punching bag during an election, or to be used as a lightning rod and such, especially when a lot of what we hear is not accurate or fact-based."

For example, while some Canadians worry about irregular migration, the number of irregular border-crossers was down slightly in 2018 compared to 2017 and so far this year, the rate of new arrivals has slowed compared to the same period last year.

"But what worries us is that sort of stuff is lost in the public opinion and it becomes more an emotional debate, rather than evidence-based," Casasola said. "That's why we're interested in trying to put out into the public information about how refugees are actually succeeding in Canada and are helping Canada."