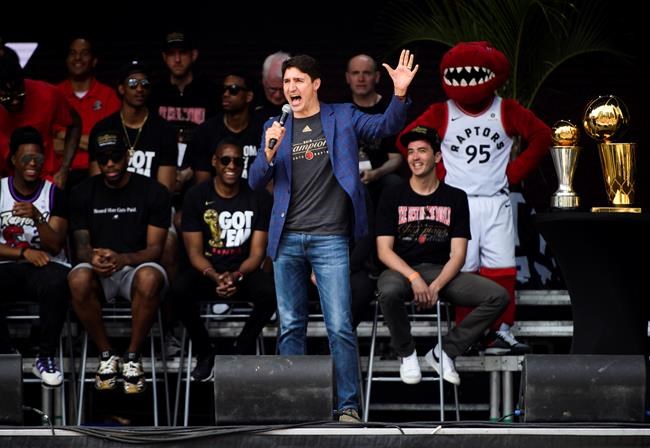 Nurse says he hasn't heard from the U.S. White House about a congratulatory meeting, but the team has been in contact with Ottawa.

"Definitely the Trudeau meeting, because they have been asking me about scheduling it," Nurse told Toronto radio station Sportsnet 590 The Fan on Wednesday.

"I have heard nothing about the White House. We are Canada's team anyway, right?"

It was not clear exactly who would attend the meeting or when it would happen.

Nurse wouldn't say if he would accept a meeting with U.S. President Donald Trump.

"We are here. Let's go see Trudeau up in Ottawa."

Nurse spoke about how Monday's victory parade in Toronto affected the team.

He said the enthusiasm of the fans, especially the young people and the diversity of the crowd, was moving.

"What struck me the most was 'Gee, everybody from the age of six to 18 is here,'" he said. "And such diversity. It was really something to see a sea of young people who were so excited and showing such nationalistic pride."

During the victory parade Trudeau addressed the celebrating crowd saying the Raptors brought all of Canada together.

Trudeau has said he is an avid fan.

On Friday, he tweeted "And that's how we do it in the North'' moments after the Raptors defeated the Golden State Warriors in Game 6 of the NBA Finals, becoming the new champions.

The prime minister also tweeted a photo of himself with two of his children and the family dog watching the final game at home.