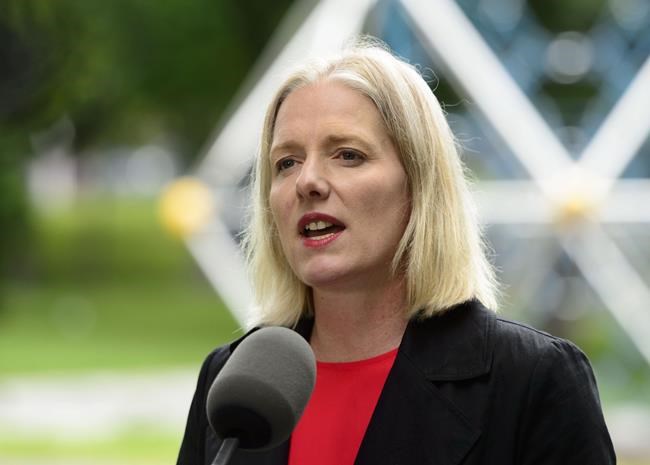 HALIFAX — The federal government and the provinces and territories say they have pieced together an action plan to gradually harmonize the recycling and reduction of plastic waste, with details yet to emerge.

Environment Minister Catherine McKenna said Thursday at a Halifax meeting of environment ministers the governments agree there should be consistent standards and targets for companies that produce plastic waste or use it to package their products.

"For the first time, we now have this national zero plastic action plan to eliminate plastic waste. This is the first phase of it," she said in a conference call during the lunch break.

She also told reporters that over time the plan could ensure that companies are held responsible for managing and collecting their waste and paying the costs involved.

However, the document is written in very general language, with the earliest goals for achieving the various targets being December 2020 and most extending to December 2021.

Tensions also continued around the table between McKenna and ministers from conservative governments over the federal carbon tax.

Jeff Carr, New Brunswick's environment minister, said after the meeting that he'd used the occasion to take McKenna to task over the use of carbon taxes being collected in his province.

Some of those funds are being sent back to the province to finance energy retrofitting of schools.

"New Brunswick can spend its own money on own energy efficiency priorities without the help of Justin Trudeau and Catherine McKenna," Carr said during his closing remarks.

McKenna — who skipped the closing news conference — said too much time was wasted on these kinds of discussions during the meeting.

"Had New Brunswick stepped up, they would have been able to determine what to do with the carbon tax revenues," she said during her conference call.

There were concerns before the meeting that the high level of antagonism between McKenna and conservative governments over the federal carbon tax might harm talks on other environmental issues.

Five of the provinces at the table are challenging or plan to challenge Ottawa in court over its "backstop" carbon tax, and a decision in Ontario's case is coming Friday.

Last fall, the group was to meet in person in Ottawa to discuss plastic pollution but that meeting was downgraded first to a video chat and then to just a phone call. While officials chalked it up to scheduling conflicts, behind the scenes it was said that the carbon-tax disagreement between Ottawa and many provinces was to blame.

Still, during that call the provinces and Ottawa agreed to work toward cutting Canada's waste in half by 2040 and trying to eliminate plastic as a source of garbage altogether.

He said the Canadian Council of Ministers of the Environment will keep working on the details and officials will bring back proposals, "for consideration at next year's meeting."

Canada only recycles about nine per cent of the plastic it produces. According to a recent report prepared for Environment Canada by Deloitte and ChemInfo Services, in 2016 Canadians threw out 3.3 million tonnes of plastic, 12 times more than was recycled.

"A nine per cent recycling rate is abysmal," McKenna said ahead of the meeting.

There are a limited number of recycling facilities in Canada, and a lack of standards for plastic packaging makes it difficult to recycle many items. Different dyes or glues used in labels can make recycling impossible, for example.

The Deloitte report also noted it is still cheaper and easier to produce and use new plastic than it is to recycle and use recycled plastics. The report recommended setting standards to require packaging materials and other products to use a set amount of recycled material to create new demand that would propel growth in the domestic recycling industry.

Prime Minister Justin Trudeau announced earlier this month that Canada was looking at banning a number of single-use plastic items within the next two years, including Styrofoam take-out containers, plastic straws and cutlery.

The products that will be banned won't be determined until the Canadian Environmental Protection Act review process is completed.

But environment groups aren't certain the provinces and Ottawa are getting a strong enough message about the need to reduce plastics.

A number of environment organizations rolled out "a plastic carpet" outside the ministers' meeting Thursday, using some of the 113 kilograms of plastic waste collected in Halifax Harbour on a single day — June 15.

Sarah King, head of the oceans and plastic program at Greenpeace Canada, said there is not enough focus in provincial-federal talks about stopping the use of plastics altogether.

Mark Butler, the president of the Ecology Action Centre — Atlantic Canada's largest environmental group — said: "Our message is work together. Put aside your differences and work together on plastics."

— With Mia Rabson in Ottawa