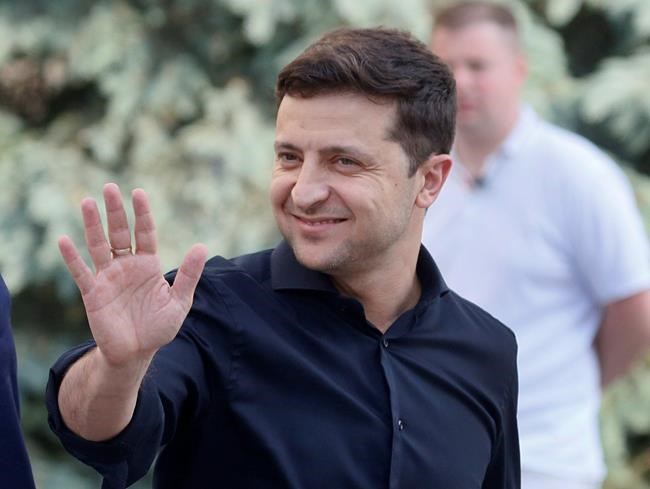 OTTAWA — Ukraine's weak judicial system is hurting the country's prospects for reform, which is the only way it will ultimately overcome Russia's ongoing aggression, says the Trump administration's point man on the embattled country.

"You have a judiciary that has been subject to political influences from various directions for a long time," said Kurt Volker, the U.S. Special Representative for Ukraine Negotiations and former ambassador to NATO. He offered that assessment on the margins of a major international conference on the Eastern European country's future that began in Toronto on Tuesday.

The meeting marked the North American debut of Ukraine's President Volodymyr Zelenskiy, who projected bonhomie before and after his meeting with Prime Minister Justin Trudeau. Zelenskiy, a popular actor and comedian with no previous political experience, easily won this spring's presidential election, unseating Petro Poroshenko.

His appearance in Toronto is partly about allaying concern over whether someone who played the Ukrainian president in a TV drama was cut out for the actual job. Representatives from more than three dozen countries and international finance organizations want to see continued momentum on Poroshenko's five years of reforms.

Zelenskiy also met David Lipton, the first deputy managing director of the International Monetary Fund, which has in the past frozen billions in reconstruction money for Ukraine because of concerns over corruption.

Volker said Lipton expressed concerns about the lack of "legal certainty" in Ukraine — the rules-based stability that gives potential investors confidence they need to enter the market.

"Investors do not have that confidence right now," said Volker. "Some terrible things are holding the Ukrainian economy back because it keeps foreign investment away."

That being said, the United States is confident that Zelenskiy is up to the task of speeding up reform in Ukraine.

"One of the things we've seen over the past years and the election of President Zelenskiy is a fresh impetus and strong determination to continue on the path to reform. We recognize there continue to be tremendous challenges," said Trudeau.

"We recognize that many of those challenges are also external, with Russia determined to interfere with the progress towards full freedoms and reforms that Canada and our friends around the world all want to see for Ukraine."

In 2014, Russia annexed Ukraine's Crimean Peninsula in the worst breach of Europe's borders since the Second World War, an act Canada and its Western allies view as illegal. Russia has also fomented a pro-Kremlin insurgency in the country's east that has left more than 13,000 dead.

In November, Russia detained 24 Ukrainian sailors and seized three ships in the Kerch Strait, which connects the Sea of Azov and the Black Sea off the Crimean coast. Last month, a United Nations maritime tribunal said Russia must free the sailors and their ships. Russia says the tribunal has no jurisdiction over it.

"We lost a good hunk of our territory and we lost the lives of Ukrainians," said Zelenskiy.

Canada, he said, is "steadfast and unwavering" in support of his county, including through its sanctions policy against Russia.

The two leaders also discussed Canada's decision to open the door to arms exports to Ukraine, which became possible as of December 2017 when Global Affairs Canada removed restrictions on Canadian companies seeking permits to sell weapons there.

The government has said little about how much business that has generated for Canadian arms manufacturers, although Trudeau said Tuesday a Canadian company has invested in an ammunition factory in Ukraine.

Zelenskiy attended the conference in Toronto more than a month before he is to visit the United States and Ukraine's envoy said that's no mistake.

Andriy Shevchenko, Ukraine's ambassador to Canada, said it's an indication of just how important Zelenskiy sees the ties between the two countries that have grown in the last 28 years.

Zelenskiy has worked quickly since he was declared the winner of the Ukrainian presidency at the end of April, dissolving his country's parliament and pushing forward with new elections for that assembly later this month, a timeline that was months ahead of its previous schedule.

Shevchenko said the conference will help Zelenskiy set his agenda for his term in office, which includes fending off ongoing threats from Russia.

Canada has supplied Ukraine with $785 million worth of military, legal, financial, development and political assistance since 2014 when President Vladimir Putin tried to bring the country back into Russia's sphere of influence just as Ukraine was poised to deepen its integration with the European Union.

Canadian is also home to 1.3 million people of Ukrainian descent. That makes them one of the country's most influential diaspora communities, which has big domestic political implications with the October federal election looming.

The Conservative opposition said Tuesday that the Liberal government isn't doing enough to show its support for Ukraine. Erin O'Toole and James Bezan, the party's critics for foreign affairs and defence, called on the government to send Canadian troops to lead an international peacekeeping mission along the Ukraine-Russia border.

They also called for increases in military and development assistance, as well as more sanctions against Russians.