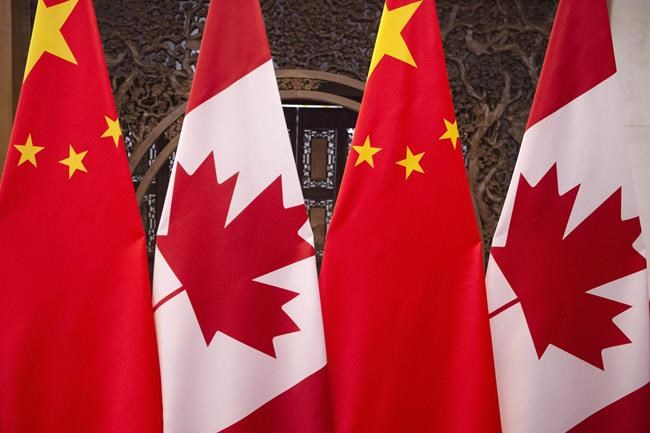 OTTAWA — The Chinese government is accusing Prime Minister Justin Trudeau of being naive in assuming that President Donald Trump did him any favours by raising the case of two imprisoned Canadians with President Xi Jinping.

Geng Shuang, a spokesman for China's foreign ministry, was talking Wednesday about Trudeau's comment a day earlier in Toronto, where he said he was "confident" Trump raised the matter with Xi at the G20 summit in Japan this past weekend.

In an Oval Office meeting last month with Trudeau, Trump said he would raise the plight of Michael Kovrig and Michael Spavor in his planned meeting with Xi, as a favour to Canada.

In December, Canada detained Chinese high-tech scion Meng Wanzhou at the request of the U.S. government, which wants to extradite her to face fraud charges.

Kovrig and Spavor were arrested 10 days later and have been charged with violating China's national security, but many view their detentions as retaliation for Meng's arrest.

Trump said before leaving the G20 in Japan that he hadn't discussed the Meng case with Xi, raising questions about whether he made good on his White House commitment to Trudeau to protest Kovrig's and Spavor's detentions.

"I would like to caution the Canadian side against being too naive," Geng said after he was asked at a Beijing briefing whether Trump raised the matter with Xi, according to a transcript released by China's foreign-affairs ministry.

"First, it shouldn't be so naive as to believe that asking its so-called ally to pressure China will work. China is a country with the rule of law and the judicial authorities handle cases independently. China's judicial sovereignty brooks no interference.

"Second, it shouldn't be so naive as to believe that its so-called ally will earnestly pursue a Canadian agenda. They will only pay a lip service, at best. The matter is, after all, between China and Canada."

Geng reiterated the Chinese view that Canada is solely responsible for the current degeneration of relations between the two countries. China has repeatedly called on Canada to release Meng.

Since then, Sino-Canadian relations have plunged to a new low.

China has all but stopped importing several Canadian products. Its authorities claim shipments of Canadian canola — for which China is a major market — have been found to be ridden with pests.

Then, prior to the G20 summit, China announced a suspension of all imports of Canadian meat products because of claimed concerns over fraudulent inspection reports. Canada has acknowledged that at least one shipment of pork went to China with bogus information attached to it but has suggested the certification was so phoney that the shipment might not even have been Canadian. The RCMP and the Canadian Border Services Agency are investigating.

International Trade Minister Jim Carr scoffed at the suggestion Canada is naive in thinking its allies could help.

"Who are they to say there is no value in Canada talking to its allies about issues that we have abroad in a multilateral system?" he said to reporters following a meeting with Canadian pork- and-beef industry representatives in Montreal. "That's how we do diplomacy."

Carr added Canada has had "countless" conversations with allied countries around the world regarding what he described as the current difficult relations with China.

"We talk about those two detained Canadians, we talk of allegations that our canola somehow contains impurities. And our allies are agreeing with us. And in their own way and within their own comfort zones, there are many messages being sent to Chinese officials."

Agriculture  Minister Marie-Claude Bibeau joined Carr in the meat meeting. She told reporters it was too early to talk about compensation for farmers hit by the closure of the Chinese market.

"Our first priority is to reopen the market," Bibeau said. "We have daily conversations with Chinese authorities, which gives me hope we can find a solution."

She said talks with China regarding meat exports are moving faster than those about canola.

Bibeau said China is dealing with a breakout of African swine fever affecting its domestic pork industry, "so they have a big demand for pork, in particular. They have a clear motivation to get our products.

"For canola, it's a little more difficult to exchange information. We still haven't received evidence of the alleged impurities."

"He's relying on the charity now of Donald Trump and other world leaders to do for him what he's not willing to do for himself, and that's stand up for this country," Scheer said in the Yukon capital of Whitehorse.

Note to readers: This is a corrected story. A previous version gave an incorrect day for Geng Shuang's comments.