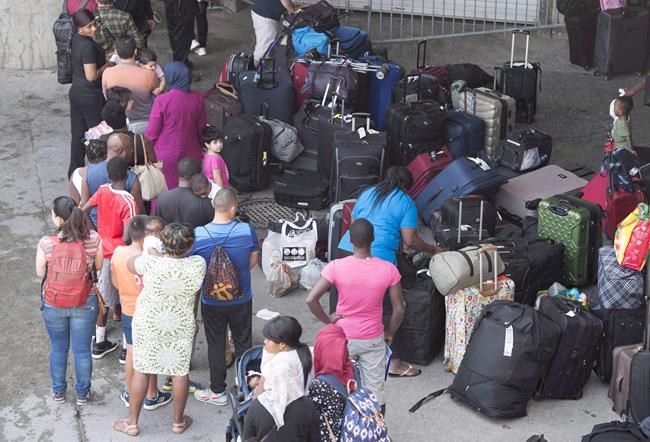 OTTAWA — The Liberals have quietly ended a much-touted "triage" program that aimed to redirect asylum seekers away from crowded shelters in Montreal and Toronto.

The federal government says it needed buy-in for from the province of Ontario for this program to be fully implemented — something it was not able to secure.

Only five families were relocated to an alternate location through this program before it ended.

"While successful as a proof of concept, it is apparent that a larger or more sustained program would require close provincial support," said Marie-Emmanuelle Cadieux, spokeswoman for Border Security Minister Bill Blair.

The triage program was announced last year after the Quebec government and the city of Toronto called on the federal government for help in dealing with an influx of asylum seekers flooding their temporary housing.

Ottawa's response was a plan to "triage" arriving migrants to see if they would be willing to settle in areas outside of Montreal or Toronto to await the outcomes of their refugee claims. That wait can take up to two years due to backlogs in claims processing.

The federal government initially tried to work with Ontario as a number of the irregular migrants who crossed the border through an forest path at Roxham Road in Quebec said they hoped to settle in Ontario.

But the feds say the Doug Ford government would not play ball, forcing Ottawa to go to municipalities to find shelter options.

A pilot of the triage program was launched in September 2018 in the southwestern Ontario municipality of Chatham-Kent. Five families who arrived in Quebec but wished to live in Ontario were transported to the town just east of the border with Michigan, where temporary housing was easier to find than in Toronto.

Cadieux calls the pilot a "success" although no other refugee claimants took part.

"IRCC (Immigration, Refugees and Citizenship Canada) has completed the pilot, which gave Chatham-Kent a chance to see how families settle and allow the federal government to learn what worked best in this pilot," Cadieux said.

"While IRCC continues to work with partners to prepare contingency plans, the immediate priority is to provide financial support to provincial and municipal interim housing operations."

In March, the department created a new interim housing assistance program to help provinces and municipalities recoup money they've spent providing temporary housing to the increased number of irregular migrants who have arrived in Canada since 2017.

Over 45,000 asylum seekers have crossed "irregularly" into the country via the Canada-U.S. border since early 2017, avoiding official border checkpoints where they would have been turned away and instructed to file an asylum claim in the United States.

Last week, the city of Ottawa received $10 million through this new federal fund.

The city of Toronto has already received $26 million and will receive another $45 million for its asylum costs.

Cadieux says Quebec "continues to be an outstanding partner" and that the Legault provincial government is actively engaged in discussions with federal officials regarding their request for funding to address immigration-related costs.

The federal department has been at odds with the province of Ontario over its demands for $200 million in refugee costs — a relationship Blair told reporters in May has been "an unfruitful effort at collaboration."

Meanwhile, the need for temporary housing for refugees has been easing. From January to May, 5,140 irregular migrants have arrived in Canada — a 45 per cent decrease compared to the same period last year.