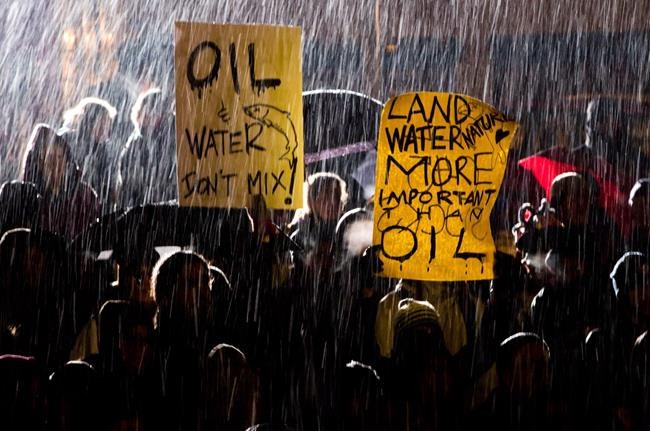 OTTAWA — Canada's spy service routinely welcomed reports from the energy industry about perceived threats, and kept such information in its files in case it might prove useful later, newly disclosed documents reveal.

The Canadian Security Intelligence Service is supposed to retain only information that is "strictly necessary" to do its job, and the spy agency is now facing questions about whether it collected and hung on to material about groups or people who posed no real threat.

Details of the CSIS practices are emerging in a case mounted by the British Columbia Civil Liberties Association in the Federal Court of Canada.

It also accused CSIS of sharing information about the opponents with the National Energy Board and petroleum industry companies, effectively deterring people from voicing their opinions and associating with environmental groups.

The review committee dismissed the civil liberties association's complaint in 2017, prompting the association to ask the Federal Court to revisit the outcome.

In the process, more than 8,000 pages of once-secret material — including heavily redacted memos and transcripts of closed-door hearings — have become public, providing a glimpse into the review committee's deliberations.

The civil liberties association published 19 volumes of the records Monday at https://bccla.org/secret-spy-hearings/.

"We encourage people to look at these documents and to decide for themselves what our spy agency has been up to," the association's Meghan McDermott told a news conference in Vancouver.

During one review committee hearing, a CSIS official, whose identity is confidential, said information volunteered by energy companies was put in a spy service database.

"It is not actionable. It just sits there," the CSIS official said. "But should something happen, should violence erupt, then we will go back to this and be able to see that we had the information … it is just information that was given to us, and we need to log it.

"Should something happen after and we hadn't logged it, then we are at fault for not keeping the information."

The review committee heard from several witnesses and examined hundreds of documents in weighing the civil liberties association's complaint.

The watchdog concluded CSIS collected some information about peaceful anti-petroleum groups, but only incidentally in the process of investigating legitimate threats to projects such as oil pipelines.

Advocacy and environmental groups Leadnow, Dogwood Initiative and the Council of Canadians are mentioned in the CSIS records scrutinized by the review committee. But the committee's report said CSIS's activities did not stray into surveillance of organizations engaged in lawful advocacy, protest or dissent.

A CSIS witness testified the spy service "is not in the business of investigating environmentalists because they are advocating for an environmental cause, period."

Still, the review committee urged CSIS to ensure it was keeping only "strictly necessary" information, as stipulated in the law governing the spy service.

Many of the newly disclosed records are almost completely blacked out, making it impossible to know what CSIS was saying about organizations.

"As they are so heavily redacted, we are really left with more questions than answers," said Alexandra Woodsworth of Dogwood BC, as Dogwood Initiative is now known.

Added McDermott: "If CSIS claims it wasn't tracking conservation groups in B.C., then why did they collect thousands of pages of files on groups who engaged in peaceful advocacy and protest?"

The civil liberties association told the committee of a chilling effect for advocacy groups from the spy agency's information-gathering as well as 2012 comments by then-natural resources minister Joe Oliver denouncing "environmental and other radical groups."

One CSIS witness told the committee that Oliver's statement did not flow from information provided by the spy agency. "As a service, we never found out where he was coming from, where he got this information or who had briefed him," the unnamed CSIS official said. "So we're not sure where he got it. But it wasn't from us."

The committee's report said CSIS participated in meetings with Natural Resources Canada and the private sector, including the petroleum industry, at the spy service’s headquarters, but added these briefings involved national security matters.

The committee found CSIS did not share information about the environmental groups in question with the National Energy Board or the petroleum industry.

The civil liberties association wants the Federal Court to take a second look, given that CSIS created more than 500 operational reports relevant to the committee's inquiry.

"The main impression one draws from the (committee) report is 'nothing to see here, look away,' when in fact there is a lot to see here," said Paul Champ, a lawyer for the association.

Dozens of censored CSIS records say the reporting was further to "the Service's efforts in assessing the threat environment and the potential for threat-related violence stemming from (redacted) protests/demonstrations."

The documents reveal that CSIS itself is asking whether it is going too far, noting the spy service is "pressing on the limitations of our mandate."

The notion that information on some groups or individuals was gathered incidentally is "cold comfort to people whose names might end up in the databanks of Canada's intelligence service simply because they expressed a political opinion on Facebook, signed a petition, or attended a protest," Champ said.

One document refers to Dogwood Initiative as a "non-profit, Canadian environmental organization that was established in 1999 'to help communities and First Nations gain more control of the land and resources around them so they can be managed in a way that does not rob future generations for short-term corporate gain.'"

The passages before and after the description are blacked out.

"This court case will take some time to play out," Champ said. "Right now, we are focused on getting access to as much information as possible so we can properly make our main arguments about how these CSIS activities violate the law."