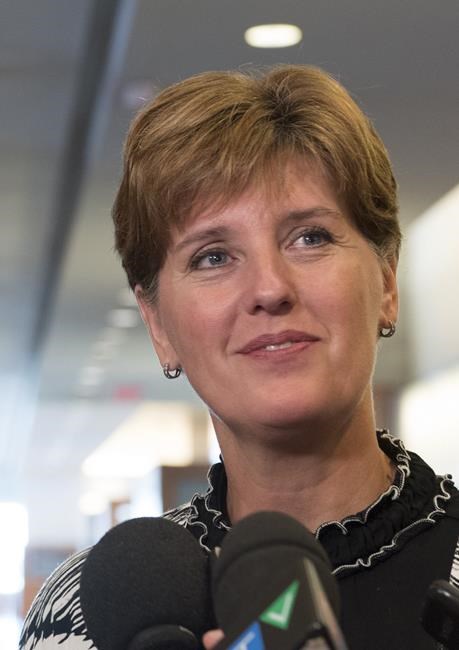 CALGARY — Canada's beef industry is getting $8.3 million in federal funds, the bulk of it aimed at growing its international market reach as a trade standoff with China continues.

The money is going to six different projects, Agriculture Minister Marie-Claude Bibeau said Wednesday during a visit to the Calgary Stampede.

The biggest recipient is marketing organization Canada Beef, which is getting $5.3 million to grow sales internationally, in part by boosting foreign consumer confidence in Canada's product.

Bibeau said the announcement would have been made regardless of last month's news that China is shutting out exports of all Canadian meat after inspectors detected a restricted feed additive residue in pork. A subsequent investigation found forged veterinary health certificates attached to the batch.

"I want to assure you we are working around the clock to resolve the matter," Bibeau said. "We all want the same thing: to resume trade with China as soon as possible and our ongoing conversations with Chinese officials are encouraging."

Bibeau said her office is having almost daily conversations with Chinese officials.

"We have submitted a plan with short-term, long-term, medium-term measures to reassure our Chinese trading partner and we are hopeful they will re-open the market as soon as possible."

She said it's premature to discuss compensation for affected beef and pork producers.

"It's tremendous news as it comes at a time when the Canadian beef industry really needs the investment to get into the markets we need to get into and to work with the end-user customers that are really looking for our product."

He said China is Canada's biggest growth market next to Japan for beef. There is also double-digit growth in the southeast Asian market.

Young said he shares Bibeau's optimism that the Chinese ban will be short-lived.

"We stand behind our system and it's just a question of working with the Chinese regulators and officials to fully understand what happened," he said. "We find with these foreign countries, usually it's a two-part thing: they really want to know what happened and what are you going to do about it."

The Canadian Cattlemen's Association is getting $1.7 million from Ottawa to build public trust in their product globally through the Verified Beef Production Plus quality-assurance program.

"We don't need large amounts of money to do that," he said. "We need to spend it well, and that's what these programs are about."

Laycraft said the beef industry has been hurt less by the Chinese ban than pork producers because it has a more diversified customer base. He said conversations over compensation would likely take place weeks or months from now if the issue isn't resolved — and he's optimistic it will be.

He said he doesn't get the sense that other diplomatic tensions — like the December arrest of a Chinese national, Huawei executive Meng Wanzhou, in Vancouver — are playing into the meat export issue.

"At this stage it is focused on the science," said Laycraft.

"Everyone I've talked to says this feels like it's a technical issue. It has a different feel to it, so I'm going to go with their assessment."