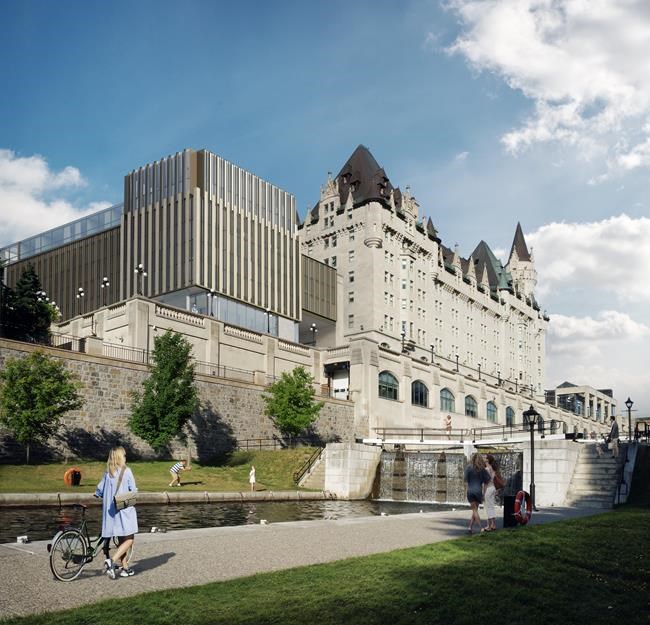 OTTAWA — Environment Minister Catherine McKenna wants the owners of the iconic Chateau Laurier by Parliament Hill to come up with another plan for an addition to the historic hotel even after Ottawa's city council approved the controversial expansion.

McKenna is the Liberal MP for Ottawa Centre and the senior minister for the Ottawa area.

"We are building for the next 100 years and I believe there is still time for common sense to prevail and for the community and the private sector owner to come together to achieve an outcome in which everyone can take pride," she said in a statement after a second city council vote in two days supported the expansion plan.

The national historic site sits across the Rideau Canal from Parliament Hill and is just outside McKenna's riding. Although she is the minister for Parks Canada, which oversees historic properties, McKenna doesn't have direct authority over the privately owned building.

Larco Investments, which owns the hotel, has worked on its plan for nearly four years and sent five versions of the design to Ottawa city hall in that time. The squarish addition, to hold nearly 150 rooms, is designed by Toronto-based firm architectsAlliance, which is known for its condominiums.

Heritage architecture principles say that a new addition to an old structure shouldn't copy the existing building; the multiple designs the Chateau Laurier's owners have submitted have all been distinctly modern, as a choice to live up to the rule with an addition that's clearly of its own time.

Critics, including numerous federal politicians, architecture professors and Ottawa's most prominent civic heritage group, say the contemporary style clashes with the French-castle look of the existing building. Some have compared it to a radiator or a shipping container, or the box the rest of the Chateau Laurier came in.

With the backing of Mayor Jim Watson, Ottawa city council voted 14 to 9 on Wednesday to let the project go ahead and confirmed that decision in a second vote Thursday, shutting down some councillors' efforts to reconsider.

Nevertheless, McKenna said she believes it's not good enough.

"I have been hearing loud and clear from residents in Ottawa Centre, the National Capital Region, and across Canada about the proposed Chateau Laurier addition. They care greatly that any addition to this iconic building in the heart of our capital be compatible with the building they love. Overwhelmingly, they do not and I do not believe that this outcome has been achieved," she said.

McKenna said she's been in touch with Larco and the city government and is willing to "participate in any discussion to achieve a better outcome."

The National Capital Commission followed up by saying it will do everything it can to ensure the project is "executed in accordance with the highest standards of excellence."

The Crown corporation stewards federal land and property, including Parliament Hill and a major park immediately next to the Chateau Laurier. That means the commission has some control over landscaping, public access to the hotel and the light and shadows it casts.

"In its discussions in the weeks and months ahead, the NCC will urge the proponent to be open to finding solutions and approaches that take into account the historic setting of the Chateau Laurier and its important role in defining the capital experience," the commission said.