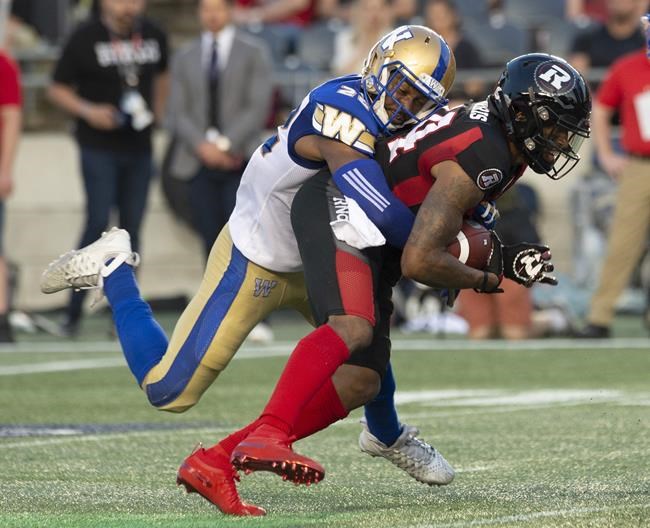 OTTAWA — After losing several key players in the off-season, there were a number of questions surrounding what the Ottawa Redblacks were realistically capable of heading into the 2019 CFL campaign.

The Redblacks (2-1) appeared to have all the answers after winning their first two games, but a number of their weaknesses were exposed last week in a 29-14 loss against the undefeated Winnipeg Blue Bombers. Another loss to the visiting Montreal Alouettes (1-2) on Saturday will raise more red flags.

Part of the problem has been the inconsistent play of quarterback Dominique Davis, who was handed the role of starter for the first time in his career. But despite pressure to perform, Davis said he isn't getting caught up in wins and losses right now.

"You don't win Grey Cups in July," Davis said ahead of Saturday's game. "I just look at it as a learning experience and take it one week at a time."

Davis has found success connecting with Dominique Rhymes and RJ Harris, but the Redblacks need to get more from veteran Brad Sinopoli. Through three games Sinopoli has 13 catches for 127 yards.

Harris will take over returning kicks this week after Ryan Lankford was released. He said he's looking forward to the added responsibility and is somewhat familiar with the role as he replaced Diontae Spencer at times last season.

"Coach has put that faith in me and I don't want to let, not only the coaches, but my teammates down," Harris said. "My teammates trust me back there and I trust my teammates up front as well. That confidence they instill me gives me the want to go out there and perform at a high level."

Harris returned kicks in college and recently spoke to Spencer who gave him some advice on what he might deal with.

"Any time you have the opportunity to carry a heavier workload you look forward to it."

The Redblacks could also have a different look to its running game as John Crockett is expected to get spot duty behind Mossis Madu.

"I'm super excited and ready to get out there," said Crockett, who looked good in two pre-season games. "To finally get out there and really put that jersey on for the first time is going to feel good."

Redblacks head coach Rick Campbell says the plan is to use both running backs Saturday afternoon.

Ottawa will need to keep a close eye on Montreal's running game.

The Alouettes are coming off their first win of the season, thanks in large part to a strong outing by running back William Stanback who had 22 carries for 203 yards.

Montreal QB Vernon Adams Jr. also has the ability to run which should make for an interesting challenge for the Redblacks, who struggled to contain the Bombers running game last week.

"The East Division games are always huge, especially the ones at home those are the ones you want to get," said Campbell. "It's a big game and we just want to play good football and see what happens."

Following his retirement last week the Alouettes announced OL Luc Brodeur-Jourdain joined Montreal's coaching staff as an assistant offensive line coach and he'll get his first taste of life from the sidelines Saturday.

CENTURY CLUB: Ottawa LB Nicolas Boulay will play his 100th career game Saturday and the fact it comes against his former team is special. Boulay spent the past six seasons in Montreal.

HEALTHY & READY: After suffering a knee injury in Week 1 safety Taylor Loffler is expected to be back on the field for Montreal Saturday.

RED ZONE: The Redblacks did not score an offensive touchdown last week for the first time this season and will look to get some numbers up early.