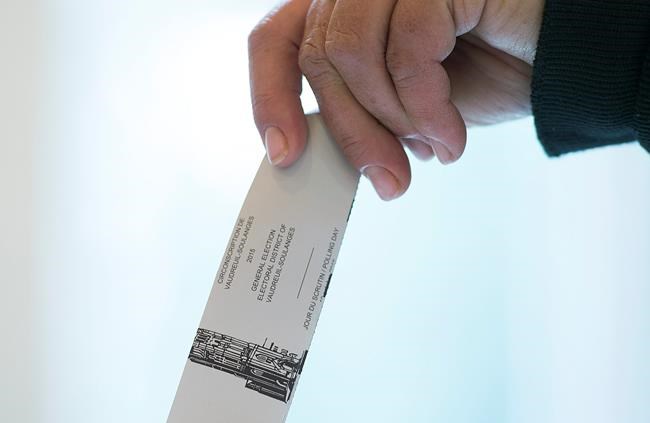 OTTAWA — Hoping to take power away from the Liberals in this fall's election, the Conservatives are well ahead of the governing party in nominating candidates hoping to win seats in the House of Commons.

As of Friday, they'd chosen 316 candidates for the country's 338 ridings.

The Tories have almost a full complement in Western Canada and Ontario, with most of their remaining open spots in Quebec and Atlantic Canada.

Newfoundland and Labrador in particular lacks Tory representation: the Conservatives currently have just three nominees for its seven seats.

They've nominated 213 candidates so far, good for just under two-thirds of Canada's federal seats. According to the party's website, six nomination meetings are scheduled over the next week, while a spokesperson for the party said "dozens more" are expected soon and the party is working with "a bigger pool of prospective candidates than we've ever had."

More Liberals are set to start campaigning in Atlantic Canada, where the party won every seat in 2015. Just a handful of those ridings needed new candidates, to fill gaps left by the retirements of MPs Bill Casey, Rodger Cuzner, T.J. Harvey and Mark Eyking.

The bulk of the nominees still to be named for the Liberals are in Quebec and Ontario — 58 combined — and are mostly in ridings that are rural or in smaller cities, many of which are currently held by Conservative MPs.

Though there are still months to go, the sooner nominees are in place, the sooner the door-knocking, hand-shaking and barbecue-attending can begin.

The nomination counts are a moving target, as more meetings are held and candidates are confirmed by their parties almost daily.

But who has already been tapped so far — and where — might hint at the ease with which parties are launching into unofficial campaigning during the summer.

Of the major national parties, the NDP trails with just 116 candidates as of Friday, with most in Ontario, B.C. and Quebec. It has barely filled out its ranks in Atlantic Canada: There are zero confirmed New Democrat candidates in New Brunswick, four in Nova Scotia and just one candidate each in Newfoundland and Labrador and on P.E.I.

The NDP does lead in nominating female candidates, who make up over half their total so far. The Conservatives have nominated a record 98 women, the party said.

So far, 36 per cent of Liberal candidates are women — just 77 of the party's current nominees. But that's a higher percentage than in the Liberals' full slate in 2015, when 31 per cent of their candidates were female.

But of the party's non-incumbent candidates, a spokesperson for the Liberal party said, more than half are women, the result of new nomination rules that require local associations to do a "robust search" for female candidates.

Two other parties are looking to field candidates in every riding. The Green Party has 208 candidates nominated so far, with strong representation already in Ontario, Quebec and especially British Columbia. The Greens have 88 women running for them, just over 40 per cent of their total so far.

Finally, the People's Party of Canada has 286 candidates confirmed as of Friday, a spokesperson for the party said. So far, the party has generally filled out its roster in the larger provinces and the Prairies, but has yet to name many contenders for seats in Atlantic Canada. The party did not provide a breakdown of its candidates by gender.

Note to readers: This is a corrected story. A previous version said that party nominees are being confirmed by Elections Canada. Candidates are not registered by the elections agency until the campaign formally begins.