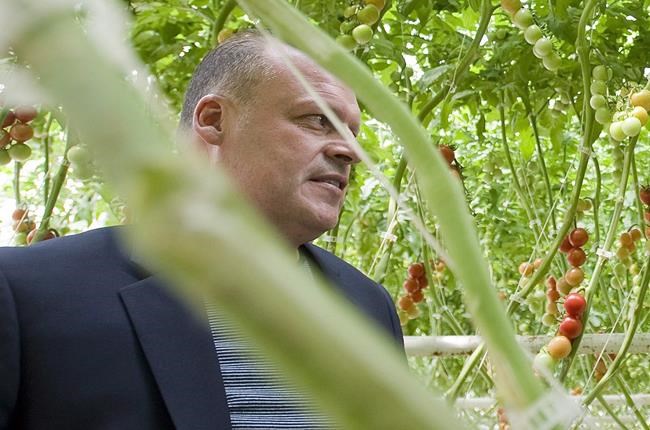 MONTREAL — A sonar-equipped provincial police boat explored a deep reservoir Monday for signs of a missing helicopter carrying a Quebec entrepreneur and his teen son who haven't been heard from since failing to return from a fishing trip last week.

Roy is founder and owner of Les Serres Sagami Inc., which produces greenhouse-grown tomatoes and other produce under the Sagami and Savoura brand names.

They failed to return as planned from a fishing expedition to Lac de la Bidiere, in the upper Laurentians regions west of La Tuque, Que.

Police turned their attention to the deep waters of the Mitchinamecus reservoir, a body of water near the chalet where Roy had stayed.

"Certain information surrounding the usual flight plan of the pilot demonstrates he often flew over this body of water, which is about five kilometres from the chalet," provincial police spokeswoman Helene Nepton said.

Four people — Roy and his son in the helicopter and two others in a seaplane — travelled to the chalet for a few days. The plane returned as scheduled last Wednesday, but the helicopter, scheduled to take off from the chalet around 12:30 p.m., disappeared.

Nepton said a faint iPhone signal captured last Wednesday may offer some additional clues of the missing pair's whereabouts. Investigators have gathered a lot of telecommunications evidence, which she said has allowed military and civilian search and rescue resources to narrow the scope of the search.

"We don't know if it will allow us to pinpoint the location of the craft," Nepton said.

Capt. Trevor Reid said the search zone covers about 12,000 square kilometres, and Griffon helicopters and Hercules planes were among the aircraft taking part.

Reid said the area being searched has slowly been shrunk and every bit of evidence helps the Joint Rescue Co-ordination Centre in Trenton, Ont. to further pinpoint the search.

The entrepreneur owned the Robinson R44 helicopter and, according to a statement from his company, was an experienced pilot.

An emergency beacon on the chopper was never triggered, Reid added.