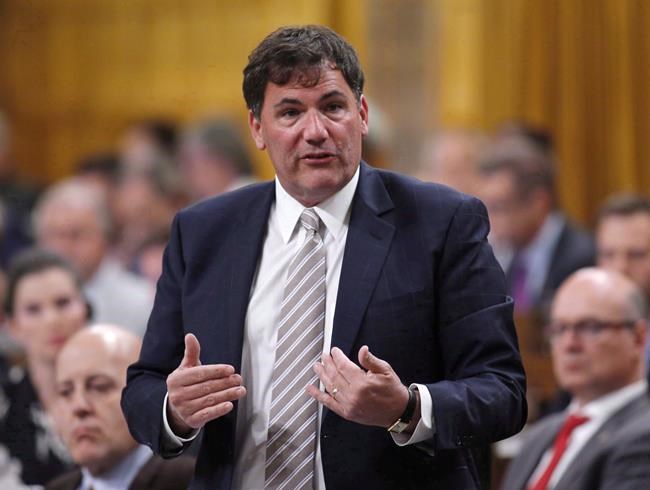 OTTAWA — The House of Commons' ethics watchdog should never have approved a flight taken by Liberal cabinet minister Dominic LeBlanc on a private aircraft owned by J.D. Irving, says an organization that advocates for greater government accountability.

"The ethics commissioner acted like an unethical lapdog by approving this unethical gift of a flight," Conacher said.

The flight, first reported by The Globe and Mail, took place on June 13, according to a filing on the ethics commissioner's website.

LeBlanc is being treated for non-Hodgkin's lymphoma and has been on medical leave since April. He needed to attend a hospital in Montreal and was told by his doctors he could not travel commercially, according to a spokesperson in his office.

He travelled from Moncton to Montreal on a "non-commercial chartered or private aircraft" owned by J.D. Irving Ltd. — a company headed by a personal friend of LeBlanc's who owns and is affiliated with companies involved in shipbuilding, oil, forestry and agriculture.

"Given his immune system is compromised, his doctors determined that he could not travel commercial," said Mikaela Harrison, a communications assistant in LeBlanc's ministerial office.

"All travel was pre-approved by the commissioner."

A statement provided by Dion's office says he "considered the facts that were presented to him and granted his approval under Section 12 of the (Conflict of Interest Act) related to travel," adding that the sparse details provided in the public filing are all that Dion is permitted to say on the matter.

That section of the law says that ministers and others cannot accept free non-commercial flights except in exceptional circumstances — generally considered to be emergencies in remote locations — or with the commissioner's approval. It doesn't spell out what should lead the commissioner to approve or forbid a flight and Dion would not elaborate.

Conacher said LeBlanc should have instead chartered a private plane and paid for it himself, rather than accept a gift from the owner of a company that regularly lobbies the federal government.

He pointed to four charter airline companies that can be hired for private flights within eastern Canada, one of which indicates online that it operates 24 hours a day, seven days a week and can be in the air within 40 minutes.

"The general rule is, you can't accept any gift that might reasonably be seen to have been given to influence you, and a gift of a free flight from a company that lobbies the federal government — anyone would reasonably see that as a gift that could have influence over the minister," Conacher said.

LeBlanc did establish a conflict of interest screen with the ethics commissioner's office after he was appointed to cabinet in 2015 that bars him from taking part in decisions that directly affect James D. Irving and his companies.

"He's supposed to stay away from anything to do with Irving, so this just compounds it."

Conacher also raised concern about the lack of transparency involved in Dion's decision. He believes all rulings and decisions of the conflict of interest commissioner should be made public, as is the case for ethics complaints that are investigated by Dion's office — they lead to reports that lay out facts and Dion's reasoning in sustaining or rejecting the complaints.

"There's no exceptional circumstance here and you're not required to take this flight from the Irvings," Conacher said. "Do like anyone else would have to do anywhere else in the country — if they didn't want to drive themselves, charter a plane."