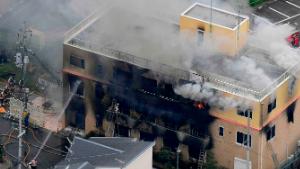 Smoke billows from a three-story building of Kyoto Animation in a fire in Kyoto, western Japan, Thursday, July 18, 2019. Kyoto prefectural police said the fire broke out Thursday morning after a man burst into it and spread unidentified liquid and put fire.(Kyodo News via AP)

At least 25 people have died in a suspected arson attack at a renowned animation studio in the Japanese city of Kyoto on Thursday, according to police.

The death toll at the Kyoto Animation Co. building is expected to rise and the city’s fire department said that 36 people were injured in the blaze, some critically.
A Kyoto prefectural police spokesperson said a 41-year-old man suspected of carrying out the attack also had a backpack containing several knives. The suspect poured what appeared to be gasoline around the studio and set it on fire.
Click here to view the original article
Click here for more political news headlines
Tweets by @natnewswatch