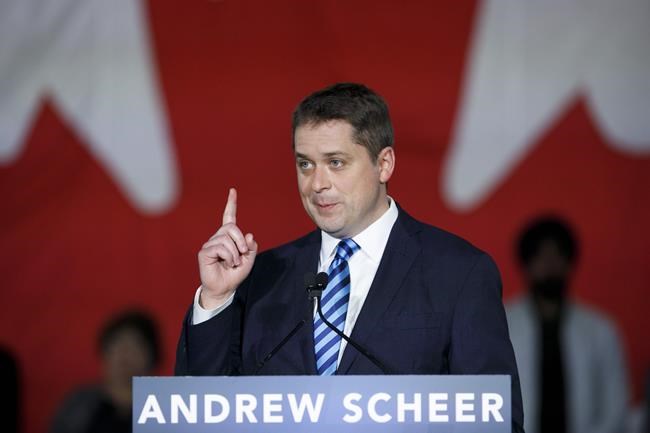 OTTAWA — Conservative Leader Andrew Scheer is putting Canada's money where his mouth is, promising to increase health and social transfer payments by at least three per cent every year should he become prime minister.

In a letter to provincial and territorial premiers released Thursday, Scheer said he wants to spell out his commitment in writing because he anticipates his opponents will misrepresent his position on health care funding once next month's federal election campaign gets underway.

"I want you to have my word in writing that I will maintain and increase that funding," he wrote.

Millions of Canadians rely on the public health care system, be it for mundane check-ups or more momentous life events like the birth of a child, life-saving treatments and caring for aging parents, said Scheer, whose party has been branded with a reputation for embracing austerity at the expense of social programs.

Canadians count on education, social assistance, early learning, child care and other programs supported by the Canada Social Transfer, and Canadians need to be able to count on stable and predictable federal dollars, he added.

"Stable federal funding is important to ensure a quality public health care system in your province."

Prime Minister Justin Trudeau has already started evoking the name of Ontario Premier Doug Ford, accusing Conservatives of being "for the people" on the campaign trail, but quickly turning to "cuts" to services once elected. "For the People" was Ford's election campaign slogan.

"We all know too well what happens once they're in office," he told candidates at a pre-campaign event Wednesday. "We've seen repeatedly just how far they're willing to go to help the wealthiest few."

In Ontario, Ford's government has been dogged by public outrage over a raft of unpopular policy changes, including increased class sizes, deep cuts to legal aid spending and less money for autism programs. Last week, it announced a new needs-based program for autistic children after months of backlash from angry parents.

Asked whether Scheer's commitment was aimed at neutralizing the comparison with Ford, spokesman Simon Jefferies would only say that health is an issue that stretches across all provinces and territories.

"We know that the Trudeau Liberals are going to try and fearmonger and misrepresent our position, so we thought it was important to put our commitment down in writing to all premiers," Jefferies said.

Scheer can write any letter he wants while campaigning but it is clear he would make "harsh cuts," said the office of Health Minister Ginette Petitpas Taylor.

"It's what Conservative politicians do," said spokesman Alexander Cohen, who noted Ford's electoral promises and contrasted them to his policies in government.

Health care costs increase by more than three per cent a year, yet neither the previous Conservative government nor the current Liberal one have managed to ensure federal transfers keep up, he said.