Conservatives, if elected, would work to restore ties with Saudi Arabia 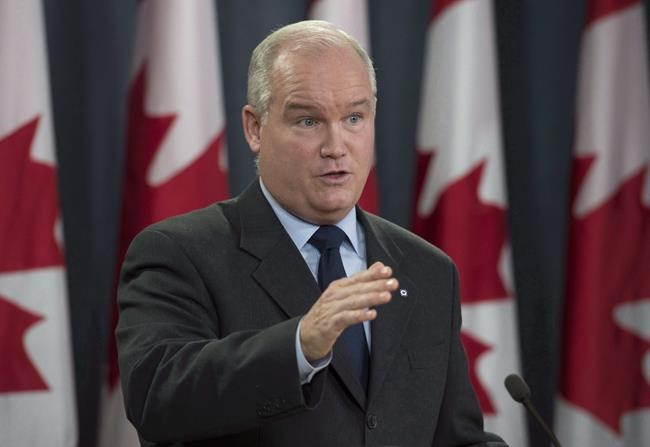 OTTAWA — A Conservative government, if elected this fall, would work to fix Canada's relationship with Saudi Arabia by trying to build back rapport with the kingdom in areas that it considers of mutual interest.

Erin O'Toole, the Conservative critic for foreign affairs, said in an interview they would try to "win some trust" with Saudi Arabia by focusing on improving commercial ties and by offering more aid, development and refugee support in the Gulf region.

He explained how the Conservatives would approach Saudi Arabia after being contacted by The Canadian Press.

The Conservatives, O'Toole said, would try to re-engage with Riyadh even though it has earned international condemnation over last fall's killing of journalist Jamal Khashoggi inside the Saudi consulate in Istanbul.

"Once you have a relationship, you can then work on issues related to human-rights concerns about the actions of Saudi Arabia vis-a-vis the Khashoggi incident, democratic reforms, all these sorts of things," said O'Toole.

He added a Conservative government would seek out common ground in a similar way with China, India and the Philippines, with Saudi Arabia perhaps the biggest challenge.

"If you have zero relationship, we're basically just yelling into the wind. We're not having any impact on them."

O'Toole acknowledged that for some Canadians, re-establishing ties with Saudi Arabia will be a tough sell following Khashoggi's death.

One year ago Friday, the first of a series of critical tweets about Saudi Arabia's arrest of women's rights activists was posted on Canadian government Twitter accounts, including one belonging to Foreign Affairs Minister Chrystia Freeland. The messages called for the release of the activists.

Angered by Canada's public rebuke, Saudi Arabia retaliated within a few days by suspending diplomatic ties with Canada, expelling the Canadian ambassador and recalling its own envoy from Ottawa.

It also said it would halt new trade and investment deals and shut down lucrative scholarships for its citizens to study in Canada. The Saudi central bank and state pension funds started selling their Canadian holdings.

The Liberal government has faced criticism from the Conservatives for the tweets that set off the dispute. O'Toole called it "immature diplomacy."

"What we need to do is just be professional and the more challenging the relationship the more we should be relying on professional diplomats and I think the Saudi Twitter dispute didn't," he said.

And since last fall, there have been few public signs of rapprochement.

Internal federal documents show that in the weeks after the start of the dispute, Freeland and her Saudi counterpart were "discussing ideas to de-escalate ... including an incremental approach which could include a series of steps." The information was in a September briefing note, obtained by The Canadian Press under the Access to Information Act.

But Khashoggi's October 2018 death, which drew condemnation from Canada and many others in the international community, presented a new challenge.

Freeland has repeatedly called for an independent international investigation to bring Khashoggi's killers to justice. Canada also imposed sanctions on 17 Saudis linked to the killing, freezing their assets and barring them from entering the country.

Dennis Horak, the former Canadian ambassador who was expelled from Riyadh a year ago, said it would probably be very difficult for a federal government to openly talk about re-building the relationship.

"I don't think the dust has settled from that sufficiently that it would be easy for the government, politically, to suddenly warm up to the Saudis," said Horak, who retired from the public service after he was ordered out of the kingdom.

Even with the obstacles, he said Canada should try to repair its strained relationship with Saudi Arabia like other countries have done in the past, including Germany and Sweden.

"It's not perfect, it's not a straight line by any stretch of the imagination, but there are positive steps that have been happening over the years and they're still happening," Horak said. "If we want this country to change, we need to engage them."

Some Middle East experts, including Horak, say the dispute could hurt Canada's chances of landing a coveted United Nations Security Council seat. Ahead of next year's vote, they say Riyadh could pressure regional allies to ignore Canada on the ballot.

Business and institutions have reported feeling the impacts of the conflict in several areas — from engineering services, to agriculture, to health care.

Andrew Padmos, CEO for the Royal College of Physicians and Surgeons of Canada, said thanks to a successful, four-decade-old program, between 20 and 25 per cent of all Saudi physicians in the kingdom had at least some medical training in Canada.

After initially ordering them to return home, Riyadh allowed medical trainees, or residents, already in Canada to complete their work. It has not permitted new students to go to Canada.

Padmos said the program has seen many Saudi families spend up to a decade in Canada, have several Canadian-born children and return to the country with a new perspective.

"We'll do more in this fashion for human rights in the world by this kind of diplomatic and educational exchange than any number of speeches or tweets would ever do," he said.

"That's the sad part of this — is that this one communication, which was handled in an unusual way, triggered a landslide that landed on top of us. And we haven't dug out of it yet."

Scott Jolliffe, chair of the Canada Arab Business Council, said Canadian businesses and institutions remain on a "blacklist" in the kingdom.

"My sources tell me that from the Saudi perspective, until the Canadian political climate changes, there's not going to be any progress, which is most unfortunate," Jolliffe said.

One recent sign that conditions in Saudi Arabia have improved came from Export Development Canada, which acts as a credit agency for firms looking to do business abroad.

A few weeks ago, EDC resumed offering its services on a restricted basis for Canadian companies in Saudi Arabia. It had stopped providing Saudi-related support last September after the dispute began, but re-opened them after initial concerns subsided, EDC spokeswoman Amy Minsky wrote in an email.

Between July 2 and July 27, EDC made 31 separate insurance credit approvals totalling US$7.3 million for existing policyholders that wanted to add Saudi Arabia back into their coverage, Minsky said.