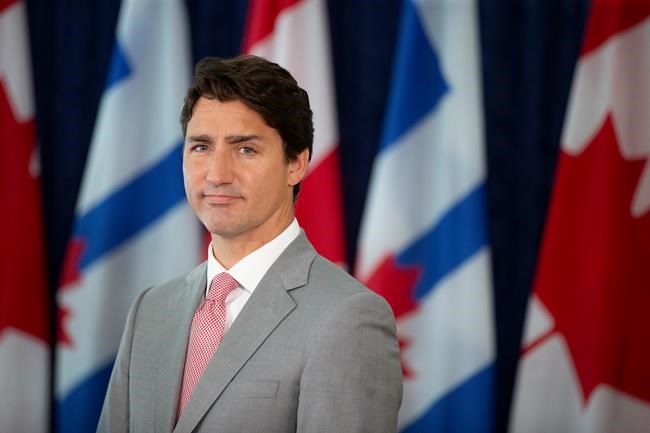 OTTAWA — Justin Trudeau refused to apologize Wednesday for intervening in the SNC-Lavalin affair, even after the federal ethics watchdog concluded that the prime minister violated the Conflict of Interest Act by improperly pressuring former attorney general Jody Wilson-Raybould to halt the criminal prosecution of the Montreal engineering giant.

Despite disagreeing with some of ethics commissioner Mario Dion's findings, Trudeau nevertheless accepted the report, took full responsibility for what occurred and pledged to institute a new protocol for ministers, staff and bureaucrats when discussing a specific prosecution with the attorney general in future.

Landing just weeks before the campaign for the Oct. 21 federal election gets officially underway, Dion's bombshell report revives a controversy that rocked the government last winter and inflicted political damage from which the Liberals had only recently begun to recover. And it gives new ammunition to opposition leaders to bolster their assertions that Trudeau is unethical and captive to wealthy corporate friends.

Dion concluded that Trudeau's attempts to influence Wilson-Raybould on the SNC-Lavalin prosecution contravened a provision of the ethics law, which prohibits public office holders from using their position to try to influence a decision that would improperly further the private interests of a third party.

Had Trudeau succeeded in convincing Wilson-Raybould to overturn a decision by the director of public prosecutions — who had refused to invite SNC to negotiate a remediation agreement in order to avoid criminal prosecution on fraud charges related to contracts in Libya — Dion said there's no question the company would have benefited.

"The prime minister, directly and through his senior officials, used various means to exert influence over Ms. Wilson-Raybould. The authority of the prime minister and his office was used to circumvent, undermine and ultimately attempt to discredit the decision of the director of public prosecutions as well as the authority of Ms. Wilson-Raybould as the Crown's chief law officer," Dion wrote.

"Because SNC-Lavalin overwhelmingly stood to benefit from Ms. Wilson-Raybould's intervention, I have no doubt that the result of Mr. Trudeau's influence would have furthered SNC-Lavalin's interests. The actions that sought to further these interests were improper since the actions were contrary to the constitutional principles of prosecutorial independence and the rule of law."

Trudeau has long insisted he was concerned only about the public interest, in particular the fate of innocent SNC employees and pensioners who stood to be negatively impacted if the company was convicted and subsequently banned from federal contracts for 10 years. But Dion dismissed that justification, saying "the larger public considerations are inextricably linked to SNC-Lavalin's private interests."

"Accordingly, Mr. Trudeau could not properly put forward any arguments involving public or private interests to the attorney general," he wrote, emphasizing the word "any."

"My job as a prime minister is to stand up for Canadians and to defend their interests," he told a news conference in Niagara-on-the-Lake, Ont

"Taking responsibility means recognizing that what we did over the past year wasn't good enough, but at the same time I can't apologize for standing up for Canadian jobs because that's part of what Canadians expect me to do."

Wilson-Raybould, who quit the cabinet in February and is now running for re-election as an Independent, welcomed Dion's report as "vindication" of her insistence that the attorney general and public prosecutor must be free from political pressure and partisan considerations. She said Dion has confirmed her position and "was not distracted by inaccurate information about the events or about me personally — and drew conclusions based on the true facts of what occurred."

The controversy has swirled around different recollections and perceptions of what occurred but Dion fully accepted Wilson-Raybould's version of events, almost scoffing at times at Trudeau's take on the matter.

Trudeau told Dion he did not instruct Privy Council clerk Michael Wernick to make "stark statements" about the prime minister's determination to find a solution to the SNC prosecution during an infamous phone conversation with Wilson-Raybould last December — which Wilson-Raybould surreptitiously recorded and which she took to be a threat that she'd be fired as justice minister if she didn't relent.

Dion didn't buy it: "It is difficult for me to imagine that Mr. Wernick would have acted without a full and clear appreciation of Mr. Trudeau's position on the matter."

Dion said Trudeau also improperly pushed Wilson-Raybould to consider partisan political interests in the matter, concluding that the prime minister and his staff "viewed the matter chiefly through a political lens to manage a legal issue" — despite Trudeau's protestations to the contrary.

Trudeau has in the past attributed the SNC fiasco to a breakdown in trust between Wilson-Raybould and his office. A summary of Trudeau's written submission to the commissioner, included in Dion's report, fleshes out that assertion, saying that the prime minister's relationship with his justice minister "had become challenging and tense" before the SNC-Lavalin affair erupted.

Trudeau was concerned about "significant friction" between Wilson-Raybould and other ministers and his office. He cited a "past example of Ms. Wilson-Raybould refusing to share information with cabinet" as evidence that she "felt that co-operation or collaboration with Mr. Trudeau's office and the rest of Cabinet was not something that she was required to do or even should do."

The report reveals that Wilson-Raybould had not been comfortable with the Trudeau government's Criminal Code amendment to allow for remediation agreements in cases of corporate corruption, which was tucked into the 2018 omnibus budget bill. As a result, she refused to publicly defend the new law, even refusing to appear at committee to discuss the provision.

When it came to SNC, Trudeau believed that "rather than making a meaningful, independent decision of her own," Wilson-Raybould "reflexively" deferred to the public prosecutor, consulting only with those who would confirm her decision to not intervene.

Dion said he did not consider Wilson-Raybould's relationship with cabinet colleagues, her "alleged political motivations or her temperament" in coming to his conclusions, judging that those things were "immaterial" to his investigation.

Trudeau's political rivals, all of whom are jockeying for position with the start of an election campaign now just weeks away, wasted little time in seizing on what appeared to be a golden opportunity.

Conservative Leader Andrew Scheer called Trudeau "the only PM in history to be found guilty of breaking federal ethics law not once, but twice."

Previous ethics commissioner Mary Dawson ruled that Trudeau violated the Conflict of Interest Act by accepting an all-expense paid family vacation in 2016 at the private Bahamian island owned by the Aga Khan, the billionaire spiritual leader of the world's Ismaili Muslims.

"His first violation ... was shocking. This one is unforgivable," Scheer said at a news conference in Regina, adding that Dion has unearthed enough evidence to warrant an RCMP investigation.

"What we have now is a true picture of who Justin Trudeau is ... Time and time again, he has used the power of his office to enrich himself, reward his friends and punish his critics."

In a statement, the RCMP said it is examining the matter carefully "with all available information and will take appropriate actions as required." The national police force added that it would be inappropriate to provide additional comment at this time.

Dion also made a point of noting that due to the confidentiality obligations that govern cabinet documents and discussions — obligations that were partially waived by the Prime Minister's Office at the height of the scandal, to allow Wilson-Raybould to testify — he wasn't able to access all the necessary materials.

He absolved senior PMO staffers, bureaucrats and others who allegedly pressured Wilson-Raybould of any wrongdoing. He said they all "acted in accordance with the general direction set by Mr. Trudeau" and that the prime minister was "the only public office holder who, by virtue of his position, could clearly exert influence over Ms. Wilson-Raybould."

Trudeau's office simultaneously released Wednesday a report by former Liberal cabinet minister Anne McLellan, who served as justice minister and attorney general in the Chretien government. Trudeau had asked her to analyse questions raised by the SNC controversy —  including whether the role of justice minister, who is involved in political and policy decisions of government, should be separated from that of the attorney general, who is supposed to exercise independent, non-partisan judgment about prosecutions.

McLellan concluded that no structural change is required. But she recommended that a detailed protocol be developed to govern how ministers, staffers and bureaucrats consult with an attorney general about specific prosecutions.