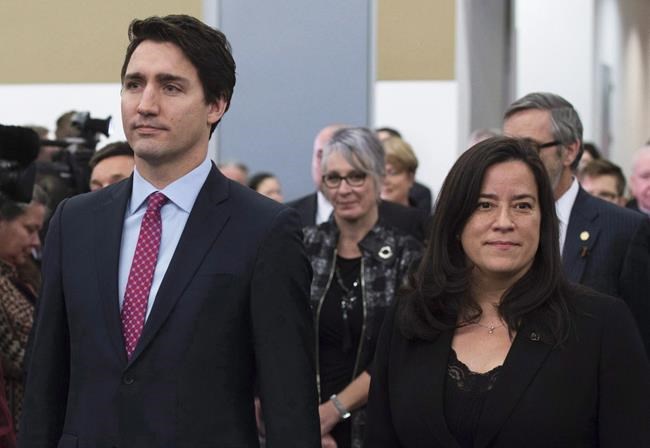 OTTAWA — After months of unrelenting news coverage, hours of oral testimony and reams of written submissions to a House of Commons committee on the SNC-Lavalin affair, the federal ethics watchdog has still managed to unearth some details that give new life to the controversy on the eve of an election campaign.

Much of the report goes over well-tilled ground about who said what to whom.

But there are nuggets that provide some additional detail, in particular about the involvement of former Supreme Court justices and why the Prime Minister's Office didn't trust Wilson-Raybould's judgment — insisting that she get a second opinion about intervening in the SNC matter.

The Prime Minister's Office knew that two former Supreme Court justices had provided legal opinions on the legitimacy of the attorney general overriding the decision of the director of public prosecutions, who had refused to negotiate a remediation agreement with SNC-Lavalin that would enable the company to avoid the risk of a criminal conviction.

SNC's legal counsel was former Supreme Court justice Frank Iacobucci, who had prepared for the company "a legal opinion that was to be shared with" Wilson-Raybould and which "outlined the legitimacy for her to intervene in criminal matters seized by the (public) prosecution service."

Iacobucci requested a legal opinion from another retired Supreme Court justice, John Major, on whether it was unlawful for the director of public prosecutions to refuse to negotiate a remediation agreement or to provide reasons for her refusal.

While the Prime Minister's Office and some cabinet ministers received copies of the two legal opinions, Wilson-Raybould told Dion that she did not see them and was not apprised of their contents.

Wilson-Raybould was repeatedly urged by senior PMO aides to consider asking "someone like" former Supreme Court chief justice Beverley McLachlin to advise her on the legality of intervening in the SNC case. But she was unaware — until Dion told her — that both SNC and a senior PMO adviser had had preliminary discussions with McLachlin about providing advice or acting as a mediator between SNC and the public prosecutor.

The report says Iacobucci initially approached McLachlin and that she had expressed a willingness to meet with Wilson-Raybould, although she had reservations about becoming involved.

All these legal opinions and discussions were taking place even as SNC-Lavalin was in court challenging the public prosecutor's refusal to negotiate a remediation agreement and "unbeknownst to the attorney general," Dion wrote.

"The fact that senior staff in the Prime Minister's Office pressed Ms. Wilson-Raybould on the idea of seeking external advice on the matter — all the while knowing the advice that would be given and selectively withholding other material information from Ms. Wilson-Raybould — was, in my view, a third attempt to bend the will of the attorney general."

Dion's report provides the most detailed explanation yet about why the Prime Minister's Office did not trust Wilson-Raybould's judgment on the matter and was so insistent that she receive an outside legal opinion.

Summarizing a written submission from Trudeau's legal counsel, Dion says the prime minister's relationship with Wilson-Raybould "had become challenging and tense," and that Trudeau was "concerned with the significant friction" between the minister and other cabinet colleagues and his office.

The legal counsel cited Wilson-Raybould's refusal to share information with cabinet on a previous matter as an example of how she "felt that co-operation and collaboration with Mr. Trudeau's office and the rest of cabinet was not something that she was required to do or even should do."

The report reveals that Wilson-Raybould was concerned that the government had "rushed" consultations on creating a new remediation regime for corporate corruption cases in order to tuck an amendment to the Criminal Code to that effect into the 2018 omnibus budget implementation bill.

As a result, she refused to read the memorandum to cabinet regarding the amendments or to publicly defend the new regime in public or before parliamentary committees.

When it came time last fall to consider intervening to enable negotiation of a remediation agreement with SNC-Lavalin, Trudeau's legal counsel argued that Wilson-Raybould "failed in her duty as attorney general to acquaint herself with all the relevant facts. Rather than making a meaningful independent decision of her own, Ms. Wilson-Raybould reflexively deferred to the director of public prosecution's decision" and ignored the advice of her deputy minister to take more time to reflect and seek additional information.

Trudeau argued that the consultations Wilson-Raybould did do were done "to confirm a decision she had already made" to not intervene.

Moreover, his legal counsel said Wilson-Raybould's anger at being shuffled in January out of the prestigious justice portfolio to veterans affairs "coloured her perception of prior events" involving SNC-Lavalin. Had Wilson-Raybould felt "a line had been crossed" in pressuring her over the case, she should have complained to Trudeau about it or resigned — which she only did in February after news reports of improper pressure surfaced.

Dion said he did not consider Wilson-Raybould's relationship with cabinet colleagues, her "alleged political motivations or her temperament" in coming to his conclusions, judging that those things were "immaterial" to his investigation.

In a statement, Wilson-Raybould said Dion's report "represents a vindication" of the independent role of the attorney general and the director of public prosecutions in criminal prosecutions.

"The commissioner was not distracted by inaccurate information about the events or about me personally — and drew conclusions based on the true facts of what occurred," she said.