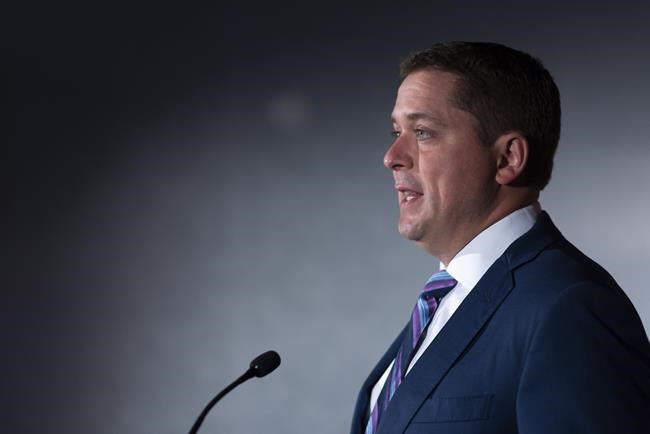 OTTAWA — Questions about the SNC-Lavalin affair Monday trailed Justin Trudeau to Quebec — the seat-rich province at the centre of the controversy, and a place where the prime minister could conceivably limit the damage.

But in Quebec — critical to Liberal re-election hopes in October— the matter appears to have been met with less outrage than other parts of Canada. If true, it could be a key factor for the Liberals, which hold 40 of the province's 78 seats and hope to capture more in October.

Trudeau faced more SNC-Lavalin questions Monday in Quebec City, where he announced a federal investment of up to $1.2 billion towards the local public transit network.

He repeated his line that it's his responsibility to protect jobs, families and retirees.

Last week, Trudeau said he disagreed with some of Dion's findings — and he refused to apologize for his actions, insisting he was "standing up for Canadian jobs."

His decision to remain unapologetic and stick to his jobs message appears to be directed at Quebecers, said McGill University political science professor Daniel Beland.

"There are a lot of people who criticize Trudeau for what happened, the way it was done. But the argument about jobs has more resonance."

In one example, Montreal's French-language La Presse newspaper ran a column the day after the report's release titled: "Trudeau and SNC-Lavalin: good cause, bad means."

Beland says the SNC-Lavalin controversy has indeed hurt the Liberals in Quebec, but the provincial fallout could be limited due to an important factor: economic nationalism.

He said economic nationalism crystallized in Quebec decades ago during the Quiet Revolution, when there was a sense among francophones that the province should play a greater role in the economy to help build stronger businesses. Among some voters, Beland added, there's still a feeling that big Quebec companies like SNC-Lavalin are part of the province's identity, can help it advance as a society and must be protected.

"He wants to appeal to these sentiments of economic nationalism," Beland said of Trudeau. "I think that's part of the subtext to this."

The economics of the affair have made their mark. Quebec's massive Caisse de depot pension fund, the company's largest investor with nearly a 20 per cent stake, has seen the value of its shares drop by more than $800 million since the start of the year.

Francois Legault, Quebec's nationalist premier, has come to the defence of SNC-Lavalin.

"SNC-Lavalin is perceived as being an asset rather than a liability by not only elected officials, economic actors but also public opinion, by and large, in Quebec contrary to the rest of Canada," said Francois Petry, a political science professor at Universite Laval.

He said while media coverage of Dion's report has been heavy across Canada, Quebec's French-language outlets have given the story less attention.

Petry said polls have shown Quebec was the only province where the majority of respondents were in favour of seeing SNC-Lavalin avoid prosecution by being invited to negotiate a plea-bargain-type deal, which Trudeau was pushing for. In all the other provinces, he said more respondents said the company should face a criminal trial rather than a remediation agreement.

With the election campaign set to begin in the coming weeks, the Dion report has provided a new opening for rivals.

Earlier Monday, Conservative Leader Andrew Scheer said the conclusions about Trudeau's handling of the affair appear to align with a criminal offence. Scheer also urged the head of the RCMP to use all the resources at her disposal to investigate the matter. It's the second time he's made such a request, the first being at the height of the controversy back in February.

Gerard Deltell, a Quebec Conservative MP, said Trudeau's actions — and his refusal to apologize — make it "crystal clear" he cares more about his own job and the jobs of his friends than any others.

"I'm a politician, I am partisan — 100 per cent, for sure. It's part of my job," Deltell said. "But I would never do that (to) judiciary affairs. And the prime minister crossed the line without any regrets."

Alexandre Boulerice, a Montreal NDP MP whose riding neighbours Trudeau's, acknowledged that SNC-Lavalin still represents a proud, modern Quebec to a lot of people in the province, particularly among French-speaking baby boomers.

But Boulerice said the "vast majority" of Quebecers will see the story as Trudeau being found guilty of conflict of interest for personal or partisan interests, and he wants the prime minister to apologize.

It has left the impression "that the Liberals are there for their rich friends and millionaires," Boulerice said.