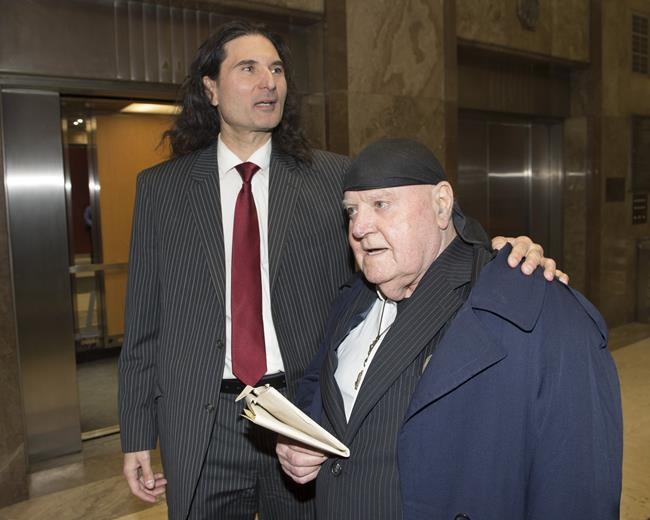 TORONTO — The editor of a Toronto-based publication was handed the maximum one-year jail sentence on Thursday for promoting hatred against women and Jews.

In sentencing James Sears, Ontario court Judge Richard Blouin said he would have handed down a much stiffer sentence had the law allowed.

"It is impossible, in my view, to conclude that Mr. Sears ... should receive a sentence of any less than 18 months in jail," Blouin said. "Mr. Sears ... promoted hate to a vast audience in an era where online exposure to this material inexorably leads to extremism and the potential of mass casualties."

The sentencing of the editor of Your Ward News, who had sought to reopen his trial, came after Blouin rejected Sears' arguments that his lawyer had thrown the case. Sears, 55, who had gone into the courtroom expressing confidence that the case would be again put over, looked stunned at the sudden turn of events and quietly shook his head.

"Don't worry honey," he told his wife, who was carrying a child, as officers handcuffed him and led him from the courtroom.

"That's not right," one supporter said from the back of the courtroom before leaving in tears.

Blouin had found Sears and Your Ward News publisher LeRoy St. Germaine, 77, guilty in January of two hate counts each.

Evidence was that the free publication was distributed over three years to more than 300,000 homes and businesses in the Toronto area as well as online.

It consistently portrayed women as inferior and as inviting rape. It also promoted tropes of Jews drinking the blood of Christian children and denied the Holocaust occurred. Those themes continued even after the trial started, Blouin noted.

The Crown had called for the maximum six months on each count for a total one year for Sears.

The judge did deny a prosecution probation request to bar Sears from publishing Your Ward News. Such a ban would violate the constitutional right to free expression, Blouin said.

"Mr. Sears should be free to publish whatever he wishes, even if unpopular and objectionable, as long as his words do not offend the Criminal Code," Blouin said.

After sentencing submissions in April, Sears fired his lawyer, Dean Embry, and attempted to have Blouin reopen the trial so he could call expert witnesses in his defence. Sentencing had been repeatedly delayed as Sears sought to convince Blouin.

In an affidavit submitted to the court, Embry strenuously denied any suggestion he deliberately botched the case, saying he had defended his client to the best of his ability and that his client had accepted his judgments.

"I am proud of the work I did for him," Embry said.

At the outset of Thursday's hearing, Sears tried to press his point that Embry had provided ineffective assistance by refusing to call any defence witnesses. Sears said he had gone along with Embry despite his increasing misgivings about the lawyer's strategy.

"My position is that he's a lawyer. At the time, I didn't have the knowledge. I don't have a God complex," said Sears, who has repeatedly compared himself to Jesus Christ.

"Is this really just a revisiting of the case?" Blouin asked, saying anyone who loses can blame the lawyer's tactics.

For its part, the Crown argued in its written submissions that Embry had made a tactical decision that was not now open to the court — or to Sears — to second guess.

"Mr. Embry approached the case tactically and professionally," Blouin said. "This was not incompetence or worse. This was a lawyer doing his job. It just didn't work."

Blouin also said he would sentence St. Germaine on Aug. 29. The judge said he had only found out on Wednesday that the publisher was not amenable to a restorative sentencing circle that would have seen him face representatives of his victims.

The Crown wants St. Germaine jailed for a total of six months.

Noah Shack, with the Centre for Israel and Jewish Affairs, called Sears' sentence a moment of justice.

"Those who promote hatred must be held accountable," Shack said. "What starts with words can often lead to violence."