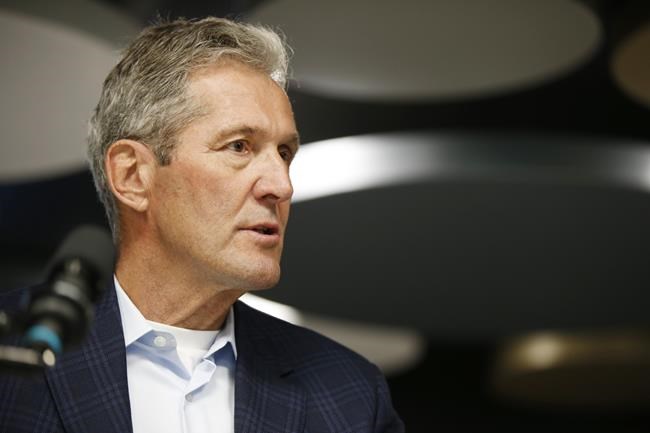 Manitoba Premier Brian Pallister says the loss of seats the Progressive Conservatives suffered in the provincial election shows his government needs to do a better job communicating with people.

Pallister says his government needs to explain better why it is making changes to key programs such as health care.

Voters have given Pallister a second-straight majority mandate.

While some constituencies are still too close to call, the Tories are on track to win 35 seats, five fewer than in 2016.

Pallister says he doesn't view the result as a rebuke by voters.

Manitoba NDP Leader Wab Kinew says his party will be the conscience and the progressive voice of the province.

Kinew says the gains his party made in seats over the 2016 vote show people care about the health-care system and they want the Progressive Conservative government to do better.

The NDP is on track to win 18 seats, four more than they won in the last provincial election.

Kinew joked that his concession phone call to Premier Brian Pallister was local.

Pallister has faced criticism for the amount of time he spends at his vacation home in Costa Rica.

Mayer is the lone Progressive Conservative cabinet minister to not be re-elected.

Manitoba Liberal Leader Dougald Lamont says his party can be proud of the campaign it ran.

He says the results have taught him that he can give everything he can and sometimes it is just not enough.

He says the Liberals have a bright future in Manitoba.

The Liberals are on track to take three seats, the same total they took in 2016, but one fewer than they held when the election was called.

Manitoba Premier Brian Pallister will have most of his ministers back at the cabinet table as he starts his second mandate.

Key ministers such as Scott Fielding in finance and Kelvin Goertzen in education, have won their seats for the Progressive Conservatives by large margins.

Lamont took the longtime NDP seat away from the New Democrats in a byelection last year after he became party leader.

The Liberals are on track to take three seats, the same total they took in 2016, but one fewer than they held when the election was called.

The Progressive Conservatives under leader Brian Pallister have won their second-straight majority in Manitoba.

The Tories ran their campaign promising further cost-cutting and tax reductions after reducing the provincial sales tax in their first term and trimming annual deficits.

Opinion polls had consistently suggested a sizable lead for the Tories provincewide, but also indicated it could be a tight race with the NDP in Winnipeg.

The Tories won 40 of 57 seats in the 2016 vote — the largest majority government in the province in a century.

It looks like that total will be smaller this time around with the NDP showing better than it did three years ago.

Former Liberal leader Jon Gerrard has won a seat for the Manitoba Grits.

His Winnipeg seat of River Heights is a longtime Liberal stronghold.

Manitoba NDP Leader Wab Kinew has been re-elected in the constituency of Fort Rouge.

The seat south of downtown Winnipeg has long been an NDP stronghold.

Green party Leader James Beddome, who lives in the area, was trying to topple Kinew.

Beddome has run unsuccessfully five times — each time in a different constituency.

The Progressive Conservatives under leader Brian Pallister have won their second mandate from Manitoba voters.

The question now is whether it will be a majority or minority government.

Independent incumbent Cliff Graydon has gone down to defeat in the Manitoba election.

Graydon was kicked out of the governing Progressive Conservative caucus over inappropriate remarks made to female staff members at the legislature.

Josh Guenter took Graydon's Borderland seat back for the Tories.

He first won his Fort Whyte seat in southwest Winnipeg in a byelection in 2012 after he became party leader.

He was handily re-elected again in the 2016 election.

The governing Progressive Conservatives have jumped out to an early lead as the results of the Manitoba election have started to come in.

The Tories are holding leads in many of the rural seats where they were expected to do well.

The polls have closed in the Manitoba election with Brian Pallister and his Progressive Conservatives hoping they've done enough to sell voters on giving them a second term.

The vote marked the end of a four-week summertime campaign that offered few surprises and did not garner much in the way of public attention.

The Tories offered voters a platform of continued cost-cutting and tax reductions.

Pallister declared Manitoba the most improved province in Canada under his leadership.

The Opposition New Democrats and their leader, Wab Kinew, focused on Pallister's health-care reforms during the campaign and have promised to reverse some of the Tory cuts.

Pallister called the election more than a year ahead of the scheduled date and gave different reasons for the early call.

He initially referred to the ability to go early as a competitive advantage, then said holding the vote this year would avoid a clash with Manitoba's 150th birthday celebrations in 2020.