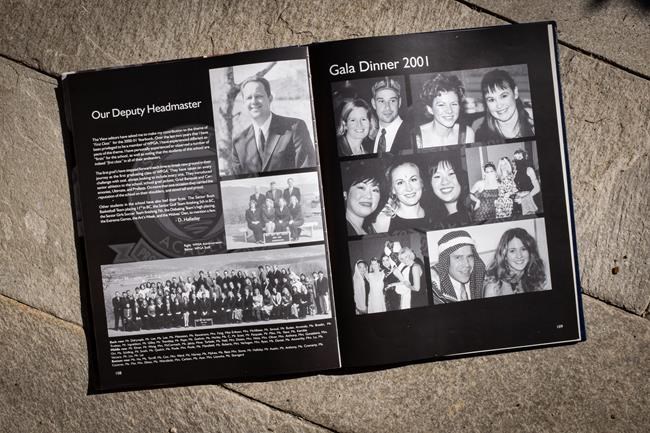 OTTAWA — The source of a photo of Justin Trudeau appearing in brownface at a 2001 event — the first to rock the Liberal leader's re-election campaign — broke his silence Friday to say he was acting with the public's interest at heart.

Michael Adamson's statement said his decision to send a yearbook containing the photo to a reporter at Time magazine "was motivated solely by the belief that the Canadian public had a right to see it."

The statement went on to say that Adamson has never been a member of a political party, and he did not receive any payment for providing the photograph to the American publication.

The 18-year-old image of Trudeau — his face, hands and neck completely darkened by makeup while wearing an elaborate turban and robe to be made up like the character Aladdin — was taken during an "Arabian Nights" gala hosted by West Point Grey Academy, a private school in Vancouver where Trudeau was a teacher at the time.

Time published the image one week after the federal election campaign officially began, and described Adamson as a Vancouver businessman who was "part of the West Point Grey Academy community."

Adamson said in his statement that he had heard gossip about the photo because of his position in the private school community, and was able to obtain a copy of the yearbook to send to the Time reporter.

The controversy around Trudeau's appearance in brownface deepened when he admitted to wearing blackface as well and more images emerged, throwing the federal election campaign into chaos when the instances became public starting Sept. 18.

While the conversation around the incidents themselves — and Trudeau's response to the political crisis — continued, some questioned how the initial photo had been missed by Canadian journalists and politicians, and instead found its way to an American magazine.

Scrutiny turned to Adamson, who was named in the Time piece, but was not immediately reachable by journalists looking to follow-up on the story.

Details first published in The Globe and Mail revealed Adamson was a consistent donor to private schools and other causes in Vancouver and was involved with an export company.

The newspaper also reported that Adamson had a connection to one of the Time reporters responsible for publishing the photo through his son, who went to Cornell University in the United States with the Time reporter. Adamson himself donated to the Ivy League school.

Adamson's statement said he will not be making any more public comments on the issue, and asked for privacy for him and his family.

This report by The Canadian Press was first published Sept. 27, 2019.