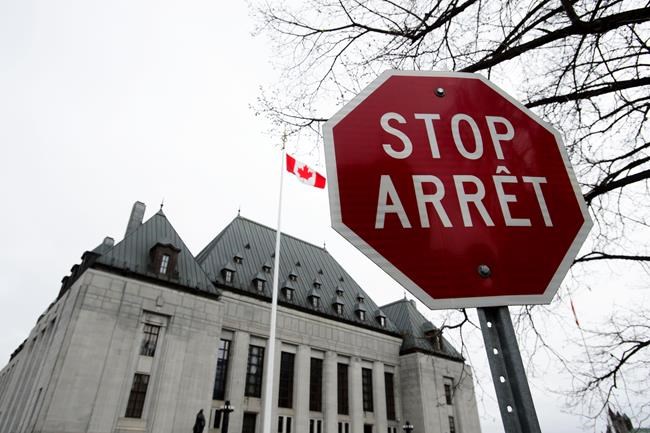 OTTAWA — Police do not have the power to arrest someone who is acting lawfully simply to prevent a possible outbreak of violence or disorder, the Supreme Court of Canada decided Friday.

According to the unanimous decision penned by Justice Suzanne Cote, such an arrest is not justifiable in cases where someone has not and is not about to commit an offence.

Cote said preserving the peace and other police duties are important, and "execution of these duties sometimes necessitates interference with the liberty of individuals... However, a free and democratic society cannot tolerate interference with the rights of law-abiding people as a measure of first resort. There is a line that cannot be crossed."

Friday's ruling from the country's top court stems from a case when Ontario police arrested a man during a 2009 protest and counter-protest centred on the Grand River land dispute in Caledonia, Ont.

Randy Fleming had been walking along the edge of a disputed property with the intention of joining a protest against the occupation of a piece of land by protesters from the Six Nations of the Grand River.

Fleming eventually crossed into the contested land to avoid police vehicles on the road. This sparked a reaction from several Indigenous protesters, who began to move toward him, at which point officers arrested him.

Fleming refused to drop a flag he was carrying, so he was overpowered, handcuffed and detained for several hours. Charges of obstructing police were laid but eventually withdrawn.

Fleming sued the police officers and province, and successfully argued at trial that police unlawfully detained him, used excessive force and violated his charter right to free expression. He was awarded damages totalling around $140,000, as well as legal costs.

The trial judge did accept that police have a power to arrest someone to prevent a breach of the peace if that potential breach is imminent and the risk is substantial. But she found the Fleming case did not meet that standard.

On appeal, a majority on the Ontario Court of Appeal ruled that police had the power to arrest Fleming, so they set aside damages awarded to him and ordered a new trial on the question of whether excessive force had been used.

The Supreme Court ruling released Friday said police were relying in the case entirely on a purported power to arrest someone who is acting lawfully in order to prevent a potential breach of the peace by other people — "a power that does not exist."

A new trial on the question of excessive force in the arrest is therefore unnecessary, Cote wrote, since "no amount of force would have been justified" in this case.

Cote acknowledged there is room for police to take actions to prevent disorder that don't affect individual liberty, but in cases where liberty is affected action should be much more restricted.

Cote said the cases in which an arrest is justifiable when less intrusive means of keeping order fail are already spelled out in law. Those powers are sufficient, she said.

She did not comment on whether police have powers short of arrest they could use to stop a potential breach of the peace, saying that was a matter for either Parliament or a court where the facts better fit that question.

This report by The Canadian Press was first published Oct. 4, 2019.