McLeod Bethel-Thompson back as the starter with struggling Toronto Argonauts 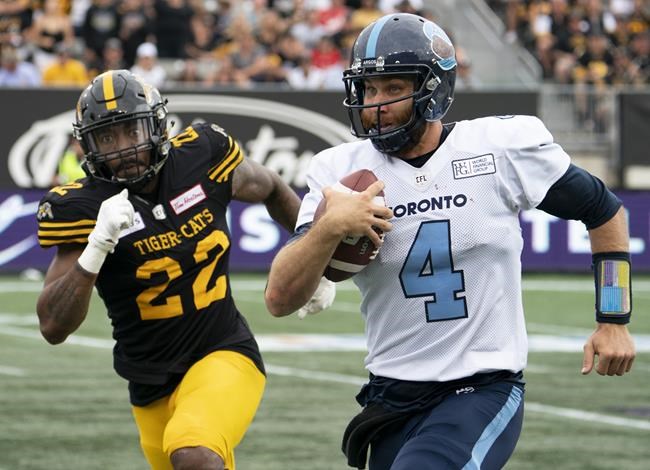 TORONTO — McLeod Bethel-Thompson is back as the Toronto Argonauts' starting quarterback.

Bethel-Thompson will begin his second stint of the season under centre Friday night when Toronto (2-12) hosts the Ottawa Redblacks (3-11) at BMO Field. Bethel-Thompson opened the season as James Franklin's backup before becoming the starter when the latter quarterback suffered a hamstring injury.

Bethel-Thompson led Toronto to its only wins of the season, but was replaced by Franklin after posting a 2-8 record. However, Bethel-Thompson regained the No. 1 job after Franklin struggled in his two starts.

Trouble is, Bethel-Thompson and the Argos are now playing for pride after being eliminated from playoff contention with last weekend's lopsided 55-8 road loss to the B.C. Lions. But Bethel-Thompson isn't letting that curtail his enthusiasm about being back under centre.

"I'm excited, I get to play football," he said. "That's what I love to do, that's what I've always wanted to do ever since I was six years old.

"We're going to play our best football Friday and control what we can control. For me, that's how well I play Friday night."

The six-foot-four, 220-pound Bethel-Thompson has quietly compiled some solid numbers this season, having completed 258-of-390 passes (66.2 per cent) for 3,184 yards with 20 TDs and 12 interceptions. He's tied with B.C.'s Mike Reilly for the CFL lead in touchdown passes.

The 31-year-old San Francisco native has thrown for 300 or more yards in seven games this season and twice surpassed the 400-yard plateau. That includes a 411-yard performance with three TDs and two interceptions in Toronto's last victory, a 46-17 decision in Ottawa on Sept. 7.

And in his first CFL start Aug. 2, 2018, Bethel-Thompson threw for 302 yards with four TDs in rallying Toronto to a thrilling 42-41 home victory over Ottawa.

"Sure, you build off the past but obviously it's a new game and new team," Bethel-Thompson said. "We definitely need to raise our game and they know us, too, which is another factor.

"They know what our concepts look like. I'm excited. It's a good opponent and a good opportunity."

However, Bethel-Thompson admits he's very disappointed Toronto is no longer challenging for a post-season berth. Bethel-Thompson was the Argos' backup to veteran Ricky Ray in their 2017 Grey Cup win over Calgary but the franchise has mustered a combined six regular-season wins since.

"It's been a crazy season," Bethel-Thompson said. "Everything that could go wrong seems to have gone wrong.

"But at the end of the day you have to block out the past and just enjoy the chance to play football. We've get to put our best foot forward."

"That's not just about being a coach or player, that's about being a man and being a professional," Chamblin said. "It's a tough situation for both clubs who've been in the championship the last couple of years and are now at the bottom.

"That plays a part on the psyche of many people in the building but you've got to go out now and start to get wins to build for next season."

Chamblin was unaware of Bethel-Thompson's history against Ottawa, though.

"No, but that's even better to know," he said. "We've gone back and forth and want to settle it a little bit.

"It's also a short week and there's not a lot of time to split reps and evaluate."

Rookie quarterback Will Arndt will make his first CFL start for Ottawa, which has lost seven straight. Traditionally, the defensive game-plan against a first-year quarterback is dialing up as much pressure as possible.

"I'll tell you what, their O-line does a decent job, better than a lot of people think," Chamblin said. "Some of that pressure might be four- or five-man but you have to make sure he's uncomfortable and doesn't find a rhythm.

"That's the biggest thing with quarterbacks."

Bethel-Thompson has plenty of respect for Ottawa's defence.

"They're definitely fearless," he said. "They're not afraid to put their corners in press man but they also play multiple coverages . . . and mix it up.

"It's definitely a lot to prepare for, especially on a short week. They're coming off a bye week so you know they're going to have something new (therefore) we've got to prepare for the unknown."

PLAYOFF CONTENTION: Ottawa remains in the hunt for a post-season berth, but just barely. The Redblacks must win out and have Edmonton (7-8) drop its remaining three games and B.C. (5-10) lose at least once to qualify for the playoffs.

This report by The Canadian Press was originally published Oct. 10, 2019.