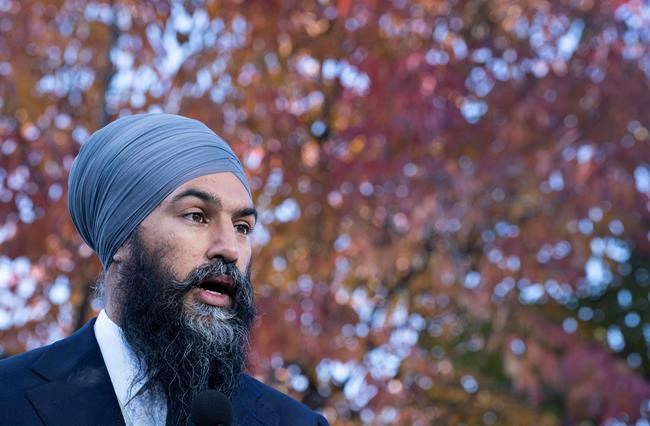 OTTAWA — The political weight attached to whether and where to build pipelines in Canada came through clearly Thursday night in a French-language leaders' debate that also saw the leaders of the three main federal parties seeking to curb the rise of the Bloc Quebecois.

The spirited two-hour contest marked a milestone for the federal election: it's the final time the six federal party leaders faced Canadians before advance polls open Friday and with them, the countdown to the Oct. 21 election day begins in earnest.

The leaders argued over a wide range of subjects that had yet to be tackled in detail so far in the campaign, including digital rights, costs for seniors and Canada's trade with China.

But it was pipelines that kept coming up, so often that moderator Patrice Roy, a Radio-Canada host, even chided the leaders for bringing them up in a segment that was focused on immigration.

The politics of building them loom large in Quebec, along with the battle against climate change, and all the leaders on stage Thursday were to some degree fighting for their political lives in a province whose voters can decide whether a party wins a majority government.

NDP Leader Jagmeet Singh and Green party Leader Elizabeth May used Liberal Leader Justin Trudeau's decision to nationalize the Trans Mountain pipeline as a cudgel to repeatedly whack down any further pledges his party might make on the environment. Bloc Quebecois Leader Yves Blanchet also used it as a proxy — how could the Liberals afford that, but not money for Indigenous children, he wondered.

Those three, plus Conservative Leader Andrew Scheer and People's Party Leader Maxime Bernier, did repeatedly gang up on Trudeau, though he was most often placed on the defensive by Scheer, who rarely missed a chance to pivot an answer into an attack on the Liberal's record.

The duo repeatedly accused each other of being ridiculous or engaging in half-truths, including on the costings of their respective platforms. The Liberals have not included the price tags for significant elements of theirs, while the Conservatives' full costing is expected to only be made public on Friday.

But Blanchet often found himself in the crossfire as well; polls suggest his party is growing its support in Quebec and the other leaders he shared a stage with on Thursday are losing support as a result.

Trudeau suggested Blanchet's idea for an equalization payment plan linked to environmental goals wouldn't work without a federal government that had national support to implement it. The last time the Bloc was strong they didn't manage to advance their agenda, this time will be no different, Trudeau said.

"What is clear is that Quebecers want to be part of the action, not part of the Opposition," he said to reporters after the debate.

Scheer tried to paint Blanchet as a separatist, accusing him of "hiding his true intentions" to make a plan with the separatist Parti Quebecois immediately after the election to revive the sovereigntist movement.

Blanchet later said he took the attacks as a compliment.

Scheer's conservatism was also attacked from the other direction by Bernier, who attempted to paint his former Conservative party colleague as simply another version of the Liberals. Positioning his own party as far more conservative than the one he left has been a key strategy for Bernier.

"Mr. Trudeau and Mr. Scheer have the same stance on climate change," he alleged, before further attacking one pillar of Scheer's approach to address emissions abroad.

Trudeau cast Scheer and Bernier as the climate-change outliers, saying there were only "four of us here who will fight to protect the environment."

May was making her French-language debate debut in the current campaign. The previous French debate, hosted by television network TVA, excluded her.

May said another hot-button issue in Quebec, a bill that forbids the wearing of symbols of faith by some of the province's public servants, should not get as much attention during this campaign as it has.

"We have talked more about that than the climate crisis, and that worries me."

She stressed her party's credentials, returning to her familiar refrain that climate change needs more urgent action because "our house is on fire." And she echoed Swedish climate activist Greta Thunberg early, saying the other leaders don't take the issue seriously enough — "How dare you?" she demanded.

But she faced grilling over how she'd pay for her climate plans.

Another contentious issue in Quebec, a proposed "values test" for immigrants, was also part of the debate, with Trudeau suggesting the idea was appropriate as it's up to Quebec to decide what questions to ask people who wish to settle there.

Thursday night's French debate got off to a much less frantic start than the officially sanctioned English debate on Monday, also at the Canadian Museum of History in Gatineau, Que.

Monday's two-hour contest in English included lengthy bouts of crosstalk and mudslinging and several leaders had complained the format didn't allow enough time to get their points across.

After Thursday's event, Scheer said he still thought there hadn't been enough time for him and Trudeau superficially to go head-to-head.

Polls have suggested the two previous televised debates gave a boost to the NDP and Bloc Quebecois, but didn't move the needle for the front-running Liberals or Conservatives.

The NDP's continued loss of support in a province that once handed them official Opposition status is a continued sore point for Singh. Earlier Thursday he had shrugged off the fact the Bloc Quebecois is picking up some of those voters, and during the debate he directly hit at Blanchet's assertion that Quebecers must vote for the Bloc to protect their interests.

"You have no monopoly over Quebec," he said.

Meanwhile, Scheer was widely considered to have taken the hardest hit in Quebec after the previous French-language debate, and though his aides had been bullish on Tory chances in the province, they've now dialled back that enthusiasm.

This report by the Canadian Press was first published on Oct. 10, 2019.