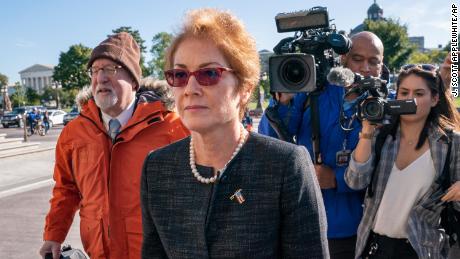 Former U.S. ambassador to Ukraine Marie Yovanovitch, arrives on Capitol Hill, Friday, Oct. 11, 2019, in Washington, as she is scheduled to testify before congressional lawmakers on Friday as part of the House impeachment inquiry into President Donald Trump. (AP Photo/J. Scott Applewhite)

Marie Yovanovitch, the ousted U.S. ambassador to Ukraine, told House impeachment investigators Friday that President Donald Trump had personally pressured the State Department to remove her, even though a top department official assured her that she had “done nothing wrong.”

Yovanovitch said that after she was abruptly recalled from her post in the spring, Deputy Secretary of State John Sullivan told her that the president had lost confidence in her, according to her prepared remarks.

“He added that there had been a concerted campaign against me, and that the department had been under pressure from the president to remove me since the summe