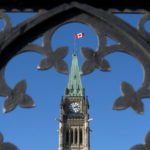 Chamber says there are many worrying observations in international report.

Ottawa-Canada has fallen behind more countries in terms of its international competitiveness and that should have been an issue in the federal election campaign, says the Canadian Chamber of Commerce.

“Today, the world’s leading competitiveness index shows that Canada has dropped in the rankings for the second year in a row, proving what Canada’s business leaders have expressed over and over and over again: this country’s business and investment environment is weakening,” the Chamber said. “It is inconceivable that Canada’s competitiveness is not a central issue in this election.”

The Chamber will be pushing the next government to undertake measures to improve Canada’s standing. It “will continue to work together with political leaders to ensure that Canada addresses these ongoing and approaching economic challenges. The Canadian business community hopes to see competitiveness front and centre in the economic vision of whomever forms the next government.”

Sectors like agrifood that has ambitious export growth ambitions will be sharing that concern.

“As a trade-dependent nation, Canada’s ability to compete is critical to our economic well-being and the financial security of every Canadian,” the Chamber said. “Despite all of the geographical and resource advantages that Canada has, we will squander these remarkable assets if we continue to ignore the limiting and sometimes harmful policy climate that erodes our ability to compete.”

Fourteenth might not sound so bad but “other countries are leapfrogging us as they remain focused on growth and competitiveness. Only two short years ago we were in the top 10.

“Which is why it is so concerning that federal politicians have paid scant attention to competitiveness and productivity this election. Without leadership from Canada’s political parties on these critical issues, our ability to compete will continue to falter, and ultimately impact the standard of living of every Canadian.”

The Chamber said, “A cursory look at where and why our ranking is sinking like a stone demonstrates some trends that Canada’s federal parties do not appear intent on addressing.”

–The efficiency, connectivity, and quality of Canada’s transportation infrastructure (32nd) leaves much to be desired