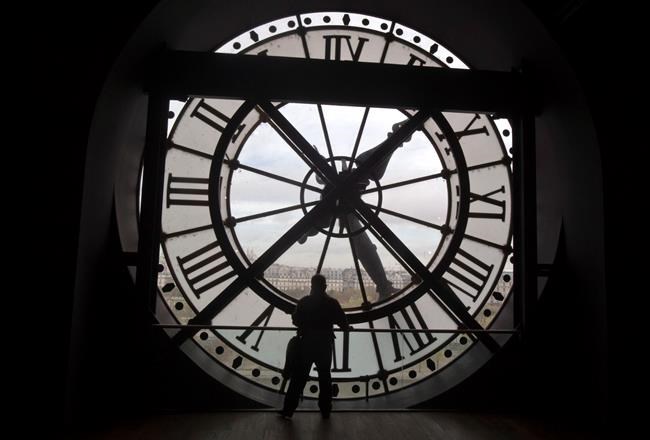 The British Columbia government's effort to formally do away with seasonal time changes marks the most decisive move in a debate that's quietly raged across Canada for years.

At least two other provincial governments have explored the notion of moving permanently to daylight time, eliminating the need to change the clocks by an hour twice a year.

While those efforts faltered, the B.C. government is tabling legislation that would see it move ahead with the plan at an undetermined time.

Scholars in a variety of fields have been pushing for permanent daylight time for years, noting the original reason for the semi-annual shift has lost its relevance today and plenty of international research suggests the practice is actually dangerous.

They say the idea of scrapping time changes enjoys broad popular support, but has often met with resistance from corporations concerned the move would make it harder to do business with other countries.

As a result, they say Canadian governments are unlikely to pull the trigger unless the United States, the country's largest trading partner, does so first.

Werner Antweiler, a University of British Columbia economics professor, said that co-ordination is a somewhat cumbersome process that may take some time to unfold. However, he said, a growing body of research suggests jumping through the bureaucratic hoops may be worth the effort.

"From the evidence that we have seen around the world, imposing a one-hour jet lag on the entire population every year is actually leading to a higher rate of accidents and lost work productivity," Antweiler said in a telephone interview.

Antweiler said the regular changes began in Canada as far back as 1908 in some jurisdictions, but they were more widely adopted during the First World War as an energy and resource-conservation measure.

Today only Saskatchewan and some isolated cities have opted not to embrace the seasonal changes and maintain one time zone year-round.

Antweiler said the original rationale for advancing clocks to extend daylight hours is all but moot today thanks to the advent of more energy-efficient technology.

But he said that's not the source of the mounting pushback, citing instead the havoc the regular time changes can wreak on everything from individual sleep schedules to global stock markets.

Lisa Kramer, a finance professor at the University of Toronto, teamed up with two other colleagues to research market performance on the days immediately following one of the seasonal shifts. They found market performance was consistently down immediately after the annual "spring forward" into daylight time.

Kramer attributes the findings to the loss of sleep most people undergo during that period, noting research has uncovered similar effects in a wide range of disciplines.

She said numerous studies have documented an increase in road accidents, workplace safety incidents and even heart attacks that can be linked to sleep disruption.

Sticking to one time zone year-round, she said, could eliminate most of the adverse effects while conferring additional benefits. Kramer cited studies suggesting additional light in the evenings can help reduce certain types of street crime.

A recent B.C. government survey found more than 93 per cent of respondents — or almost 225,000 people — indicated their support for a permanent move to daylight time.

A majority of Alberta residents also backed the idea when the then-NDP government tabled a time-change bill in 2017. But the proposed legislation died later that year amid resistance from corporations who were concerned the move would leave them out-of-synch with key business partners in other countries.

A similar bill was put forward in Ontario earlier this year and seemed poised to receive rare cross-partisan support, but died when the legislator behind it left provincial politics and successfully ran in the recent federal election.

Kramer said opposition has also come from parents concerned about sending children to school in darkness. She said any steps governments may take to address their concerns, such as moving class times back, would have ripple effects on workplace start times, day-care providers and numerous other areas.

"There are arguments on both sides, but I feel the balance of the evidence strongly supports abolishing time changes and sticking with daylight saving time year-round," she said.

Many international jurisdictions have done so, and there are signs the United States is paving the way for Canada to follow suit.

Legislators in California, Oregon and Washington have proposed bills to end the change and observe daylight time year-round. Those states require federal approval before they can act.

B.C. Attorney General David Eby said their actions, as well as a host of other issues, will be reflected in the new legislation.

No changes will go into effect before the next round of seasonal time changes. Clocks are due to move back one hour in most parts of the country on Sunday morning.

This report by the Canadian Press was first published Oct. 31, 2019