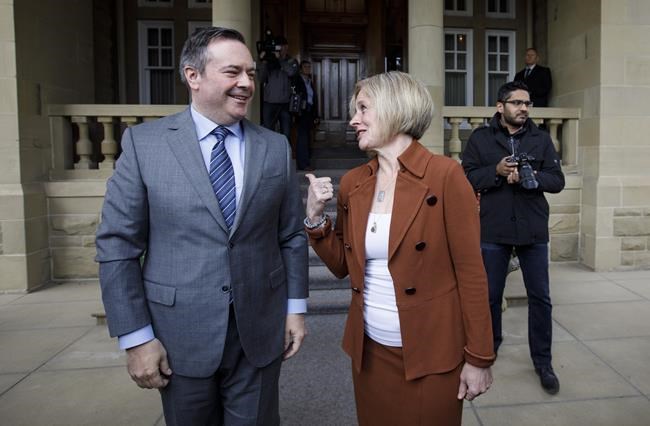 EDMONTON — A legislature meeting on budget numbers got personal Thursday, when Premier Jason Kenney accused NDP Leader Rachel Notley of being ignorant to Alberta's plight and Notley questioned his loyalty to Canada.

The angry cross-talk erupted when Notley asked Kenney why he is threatening to hold a referendum on equalization, even though Alberta has no direct power to change the constitutionally protected federal funding program.

Kenney has said he will hold a referendum on equalization payments if there is not progress on initiatives, such as pipelines, to get more of Alberta's oil and gas to market.

Notley suggested a referendum would be a potentially divisive, grandstanding power play, which would echo Quebec's votes on separation.

"You claim that you're a federalist, but do you honestly think it is responsible to ask Albertans to cast their ballot and to get worked up over an equalization provision ... when you know that the likelihood of being able to amend that Constitution is about zero?" Notley asked Kenney.

She added: "Do you think it is responsible ... to put to the people of Alberta that they vote on something that you know you cannot deliver, and then turn around and speak out of the other side of your mouth about how you're worried about concerns around western separatism?"

Kenney responded: "I resent the leader of the Opposition casting aspersions on my loyalty. I have always been, through my entire life, clear that I am and always will be a proud Canadian."

Kenney told Notley he knows the vote can't change the constitution but it would spotlight a fundamental unfairness, given Alberta delivers billions of dollars to other provinces through equalization payments and it's frustrated about national policies hindering growth of its economy.

Kenney, in turn, suggested Notley is ignoring or playing down economic woes that have seen thousands of Albertans lose their jobs.

"The way to address the deep, deep frustration in this province is not to diminish or ridicule those who increasingly feel like they are not at home in their own country," said Kenney.

"In no way shape or form did I do that. I challenged the premier's strategy," Notley responded.

"I find that (accusation) offensive."

Kenney then added, "This demonstrates that Ms. Notley does not understand Albertans. I didn't have to work them up into a sense of unfairness in this federation."

The remarks came as Notley questioned Kenney over the budget for his cabinet offices.

Notley pointed out that Kenney used $16,000 in public funds to charter a plane to fly himself and some other premiers and their wives — who joined him at the Calgary Stampede breakfast in July — from Calgary to Saskatoon for a Council of the Federation meeting.

"Why are we paying for other premiers to fly around the country?" Notley asked Kenney.

Kenney said because of tight timelines, he had to charter a plane anyway and said it was good networking and good relationship-building to offer others a ride too.

This report by The Canadian Press was first published Nov. 7, 2019.