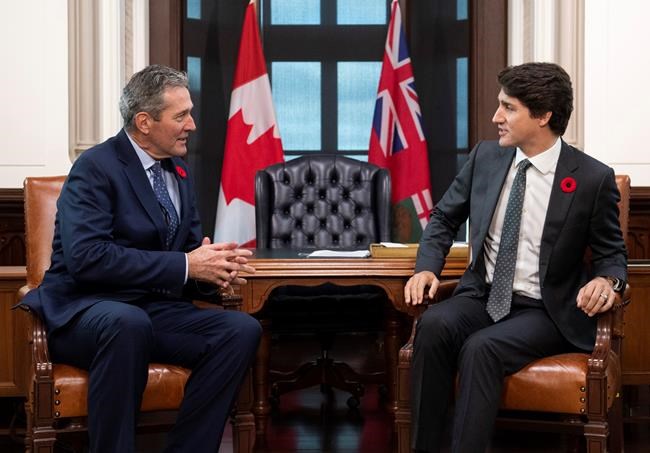 OTTAWA — Giving clear indications that he's prepared to broker a truce between the federal Liberals and his more disgruntled Prairie counterparts, Manitoba Premier Brian Pallister said he offered strategies to the prime minister Friday for uniting the country.

"I came in peace," Pallister said after a 45-minute meeting with Justin Trudeau in his Parliament Hill office.

"I'm a friendly Manitoban looking to help in any way I can to restore a sense of faith in the future of our country."

One such strategy Pallister alluded to was to turn the climate change debate on its head, making the issue a unifying force rather than what it has been so far — a point of heated and often partisan division.

"Fighting climate change is a unifying project," Pallister insisted while criticizing Trudeau for making it a wedge issue in the recent federal election.

"A political leader can divide. A prime minister should unite," he said.

"So, as we move forward, we should unite around fighting climate change and we should not be caught up in a debate about a subset of a subset," referring to Ottawa's insistence on a national carbon tax as a central plank of any plan to curb greenhouse gas emissions.

Trudeau's relationship with many provincial premiers is tense, particularly over his decision to impose a price on pollution in any province without an equivalent system of its own, including Manitoba.

Pallister opposes Trudeau's plan, but not carbon taxes in general and is still hoping the prime minister will allow provinces to create their own plans to reduce greenhouse gas emissions.

The prime minister acknowledged the divide between his government's policies and those of Alberta's Jason Kenney and Saskatchewan's Scott Moe in a news conference the day after the federal Liberals were reduced to a minority in the House of Commons without a single seat in the two provinces.

And he promised to support the West as it faces economic struggles, particularly in the oil patch.

In the days that have followed the Oct. 21 vote, a simmering separatist movement in Alberta has gained momentum under the Wexit umbrella, a name seemingly created to mimic the Brexit movement aimed at separating Britain from the European Union.

The group's founder, Peter Downing, earlier this week filed paperwork with Elections Canada to form a federal Wexit Alberta party that could, in his words, do for Western Canada what the Bloc Quebecois does for Quebec.

Pallister said he sees frustrations building in the West, not just around a failure to build pipelines to get western energy products to international markets outside of the United States, but also over the perceived snail's pace of getting just about any other project underway. He blamed it on federal regulations designed to protect the environment.

To alleviate some of those frustrations, Pallister said Ottawa needs to "get things done," such as building infrastructure that will mitigate the effects of climate change.

"The mayor of Calgary, for example, has raised concerns as I have repeatedly about flood protections that we need to get built," Pallister said.

"We're trying to build flood protection to give people their lives back in our province but we've been, after hundreds of meetings and millions of dollars, we're not sure we're getting as much progress as I would like."

Just before he and Pallister went into their private meeting, Trudeau told the premier he hoped the two leaders could work together on a number of fronts.

"Obviously there's a need to continue to invest, to grow opportunities for Manitobans . . . through infrastructure including climate change mitigation and adaptation infrastructure," Trudeau said during a photo op.

Pallister said he and the prime minister also spoke about ways to improve the lives of Indigenous Canadians in his province as well as the recent spike in the number of homicides and violent gang and drug-related crimes in Manitoba.