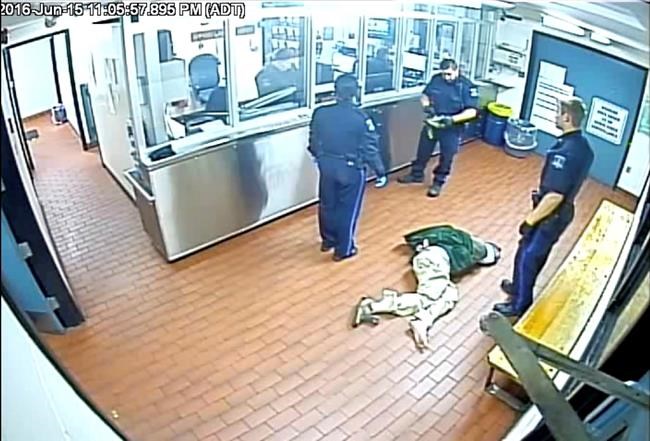 HALIFAX — Two special constables with the Halifax police force have been found guilty of criminal negligence causing the death of an impaired inmate who suffocated in his jail cell after being left with a spit hood over his face.

Daniel Fraser and Cheryl Gardner were charged with the offence in 2017 by the Serious Incident Response Team — the province's police watchdog agency — in the June 16, 2016 death of Corey Rogers.

The victim's mother, Jeannette Rogers, let out an audible gasp in Nova Scotia Supreme Court when the verdict was read, as family and friends of the accused quietly sobbed in a back row.

The verdict came following a tense period of waiting while the jury deliberated for almost 16 hours spanning three days.

"I'm so relieved," the mother said outside court. "It's been long and it's been hard, but it's been worth it."

Rogers has become a public critic of the care provided in lockup cells, and is seeking further disciplinary action against three police officers who brought Rogers to the lockup cell and left him lying on the floor with the hood over his face.

A medical examiner determined Rogers died of suffocation while lying in the narrow cell with the spit hood covering his mouth as he appeared to be vomiting.

"I know Corey is watching over me and saying 'Thank you Mom,'" the retired psychiatric nurse said. She was wearing a necklace that holds a small vial containing a few of her son's ashes, encased in a fairy-shaped pendant.

The defence lawyers and supporters of the accused left court without commenting, shortly after Justice Kevin Coady set Feb. 14 for a sentencing hearing.

Prosecutor Chris Vanderhooft had argued Fraser and Gardner failed to fulfil their duty to care for Rogers, who was highly intoxicated when he was brought to the Halifax police station late on the night of June 15, 2016.

The jury was shown video of Rogers, 41, heaving in a cell while wearing the spit hood. The mask prevents prisoners from spitting on guards, but also comes with instructions warning against leaving it on a highly intoxicated person who may vomit.

Court heard that in the hours before his death Rogers was arrested outside a Halifax children's hospital where his wife had given birth to their child the day before.

There was evidence that he was extremely impaired after rapidly drinking half a bottle of whisky, and that police saw him down the liquor.

Arresting officers testified they placed the hood on Rogers' face after he was spitting in the police car as he was driven to the station.

Vanderhooft, a Manitoba prosecutor brought in for the case, alleged Rogers died because paramedics weren't called, and the inmate was left alone, intoxicated, face down in a cell with the spit hood on.

He also argued the constables failed to follow provincial instructions for checking on inmates that had been introduced in 2012 following the death of Victoria Paul.

In 2009, Paul — an Indigenous woman from Indian Brook, N.S. — suffered a stroke in a Truro, N.S., police cell after being arrested for alleged public intoxication, and died in hospital two weeks later, prompting calls for reforms in lockup procedures and an independent inquiry.

The new provincial standards to check responsiveness — posted on the wall of the Halifax police lockup entry area — called for people overseeing police lockups to enter cells of highly impaired prisoners and gently shake them to ensure they are conscious.

The defence lawyers for the accused focused on the legal definition of criminal negligence causing death, which requires the accused show "wanton or reckless disregard" for the lives and safety of others.

Legal precedents have also been established that call for jurors to decide if the actions of the accused were a "marked" departure from what a reasonably prudent person would do in the circumstances.

"This was not, in my respectful submission to you, criminal negligence. There was no marked departure from a baseline," Bright had argued.

Special constables are employed by the police department and are appointed to specialized duties as peace officers, including the booking of prisoners, but they are not considered police officers.

Both constables testified in their own defence.

Fraser said he had been told by a superior that the requirement to rouse inmates only applied in "high risk" cases, and he did not consider Rogers to be such a case.

Gardner testified she didn't notice anything unusual about the prisoner when she checked on him in his cell.

However, the prosecution said video evidence showed the last time Rogers moved was between 11:38 p.m. and 11:41 p.m. on June 15 but it was two hours later when Fraser called out to Rogers and finally decided to enter the cell and remove the spit hood.

"Unfortunately it was too late," Vanderhooft said. "Corey had vomited long before and could not clear his own airway because the spit hood was covering his mouth."

The sentence range for criminal negligence causing death is wide, ranging from no prison time to life imprisonment, Vanderhooft said outside of court.

He told reporters it's too early to say what sentence the Crown will seek, but added it will not be the maximum sentence of life imprisonment.

An emailed comment from the Halifax police said the department will review the court’s decision and "determine next steps," declining further comment.

This report by The Canadian Press was first published on Nov. 10, 2019.