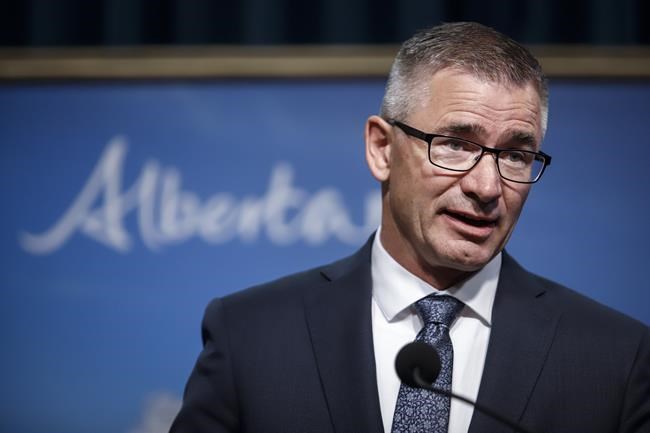 EDMONTON — Alberta's United Conservative government is firing the province's election commissioner, but says it's not because he is investigating the party and has fined it more than $200,000.

Finance Minister Travis Toews says the decision to end Lorne Gibson's contract is about saving money, but Opposition NDP Leader Rachel Notley calls it a shameful, authoritarian attack on the rule of law.

"This restructuring is about finding efficiencies and ensuring that we have the most defensible process and structure going forward," Toews said Monday before introducing the bill.

"This structural change will not affect ongoing investigations. We believe that it's critical to protect the integrity of democracy in this province."

Toews replied "absolutely not" when asked if Gibson's investigation into the UCP and the party's 2017 leadership campaign played any role in the decision to fire him.

Notley said Premier Jason Kenney's firing of the very person who is investigating him and his party for fraud "reeks of political interference. It reeks of corruption."

"It's an abuse of power, pure and simple."

Gibson's firing was contained in an omnibus bill introduced in the house and aimed at reducing spending and duplication across government.

The UCP also put time limits on the bill's debate. The NDP said it will be no more than one hour at any stage.

Gibson's contract — which runs to 2023 — is to be terminated as soon as the bill passes and is proclaimed into law. His job and five staff positions are to be transferred to chief electoral officer Glen Resler and will save an expected $1 million over five years.

Resler would be responsible for hiring a new election commissioner. Toews said it would also be Resler's office deciding whether to go ahead with existing investigations, which would include the one into the United Conservatives.

"The chief electoral officer will have full ability to rehire the existing commissioner (if he so chooses)," Toews said. "We will have absolutely no input into that."

Notley predicted Gibson's ouster will have a chill effect on all government officials tied to the investigation, which she said is effectively dead.

She said she will attempt to meet as soon as possible with Lt.-Gov. Lois Mitchell to discuss the possibility of her not signing the bill into law — a rare and controversial step.

Resler is in overall charge of running Alberta's elections, but in early 2018 the former NDP government created a separate arm's-length election commissioner to specifically investigate violations in fundraising and advertising. They hired Gibson at $195,000 a year.

Gibson's highest profile investigation has been into the 2017 United Conservative leadership race won by Kenney.

It focuses on the campaign of leadership candidate Jeff Callaway. Internal documents have revealed that Kenney's campaign team worked in lockstep with Callaway, who attacked Kenney's main rival, Brian Jean, of the former Wildrose Party while Kenney stayed quiet. Callaway dropped out of the race late to throw his support to Kenney.

Documents show Kenney's team shared talking points and a time for Callaway to drop out, but the premier has said that is normal communication among campaign teams.

Gibson has issued more than $200,000 in fines tied to fundraising violations in the Callaway campaign. Some donors to his campaign broke the law by donating money provided to them by someone else.

The RCMP has been conducting a separate investigation into whether voter ID fraud was committed in the leadership race.

Gibson has a fractious history with Alberta's conservative governments. He served as the chief electoral officer from 2006 to 2009. His contract was not renewed by the Progressive Conservative government of the time after he spotlighted problems with the electoral process, including that the PCs were appointing officials who monitored ballot boxes at voting stations.

In the spring of 2018, the then-Opposition UCP, tried to filibuster Gibson's appointment as election commissioner. It questioned whether the role was needed and, if so, whether Gibson, given his testy relations with past governments, was the right person to fill it.

This report by The Canadian Press was first published Nov. 18, 2019.