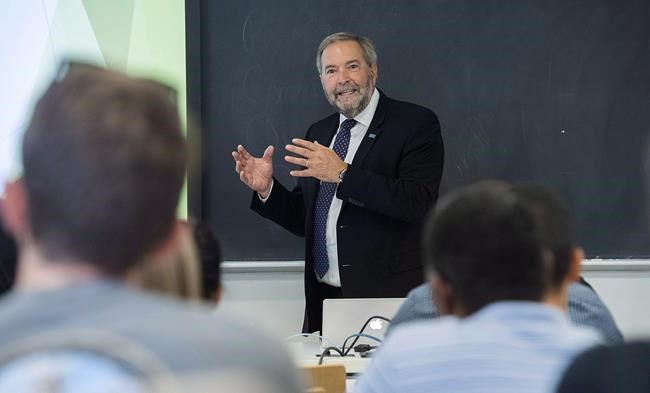 MONTREAL — Former federal NDP leader Tom Mulcair appeared at a pro-homeopathy conference on Tuesday, much to the dismay of critics who say his presence serves to legitimize a field they denounce as pseudoscience.

Mulcair told the conference in Montreal that he's been using homeopathic remedies for about 30 years and feels they help prevent him from getting sick while travelling.

He said he believes there is "scientific proof of their efficacy," and argued the Quebec government should do more to recognize and regulate the field to protect consumers' safety and their freedom to choose the products they feel work best for them.

He acknowledged homeopathy has many opponents and said he respects all points of view.

"But there are times when my point of view, like those of 4.9 million Canadians and 200 million people in the world should be respected too," Mulcair told a gathering of the Quebec Coalition for Homeopathy, which describes itself as a "pro-homeopathy positive pressure group."

Mulcair's presence was discouraging to critics of homeopathic remedies, who say there's no scientific evidence to show the remedies work for any health condition.

"It's incredibly frustrating to see any kind of action that legitimizes homeopathy, and to have someone of his stature associated with this is really problematic," said Tim Caulfield, a Canada Research Chair in Health Law and Policy and professor at the University of Alberta

Homeopathy is based on the principle that "like cures like '' — a belief that a disease can be cured by ingesting a small dose of something that produces similar symptoms in a healthy person.

Proponents of homeopathy also believe that a product becomes more potent the more it is diluted — a principle that flies in the face of basic scientific principles, said Jonathan Jarry of the McGill Office for Science and Society.

"If you've ever tried diluting your beer, you'll know that's not how dilution works," he said in an interview outside the event.

He said that while it's easy for researchers who want to prove the efficacy of homeopathy to "cherry pick" data that supports their conclusion that it works, the overwhelming majority of scientists agree there is no validity to claims of effectiveness.

Those who believe it works, he said, are often people who simply got better and credited the product for what was in fact a natural healing process.

But those in attendance at the event, which was organized by homeopathic product giant Boiron, said millions of people around the world continue to take homeopathic remedies because they work.

The conference featured a number of doctors, patients and medical experts, many of whom cited studies reporting that homeopathic remedies had an effect superior to that of a placebo.

Rachel Roberts, a U.K.-based trained biologist and former homeopath, said knowledge about homeopathy is "born out of observations and experience."

But while she's convinced it works, she said even the most committed homeopaths can't yet explain exactly how. One hypothesis, she said, is that something in the vigorous shaking process that occurs during manufacturing somehow "imprints information from the original substance" onto the pill or liquid.

Mulcair, billed as a "patron" of the conference, framed the issue as equally one of consumer choice and safety.

He called on the Quebec government to follow Ontario's lead in regulating the practice, which could ensure that patients have access to homeopaths who are licensed and held to higher professional standards.

Mulcair said he is being paid for his advocacy work, but he has believed in homeopathy for years and has no qualms about being associated with the group.  "I guess when you're in politics, you're used to associating with things that are controversial," he said.

Caulfield and Jarry, however, both took aim at the claim that homeopathic remedies do no harm just because they're safe to consume.

They say people might be convinced to try homeopathy instead of a proven treatment, wasting their money on what is essentially a sugar pill. Caulfield also believes the homeopathy lobby contributes to an erosion of critical thought that can encourage people to disbelieve scientific research.

"If you can believe this kind of nonsense, perhaps you're inviting people to believe other things that are equally problematic," he said.

This report by The Canadian Press was first published Nov. 19, 2019