‘Remember who we’re fighting for,’ Singh says as NDP caucus sworn into office 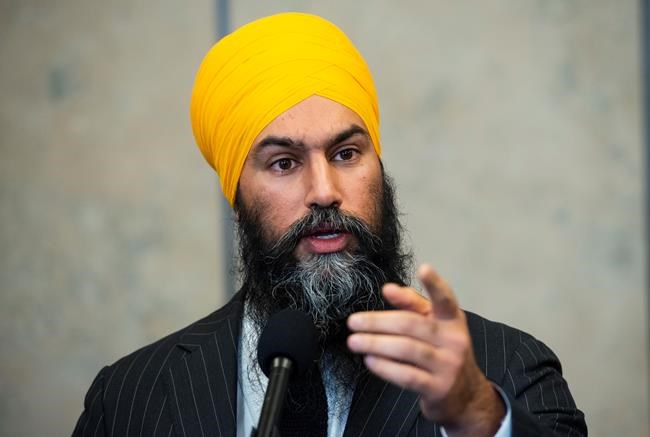 OTTAWA — When it comes to Justin Trudeau's minority government cabinet, NDP Leader Jagmeet Singh says he's more interested in seeing whether the Liberals change the way they govern than finding out who makes the cut.

Singh shied away from commenting on the reported movements of certain ministers ahead of the official cabinet unveiling, which will take place at Rideau Hall Wednesday, but said he'll be looking for a new tone and a new approach.

"The changing of a particular person in a portfolio isn't my focus," Singh told reporters Tuesday.

"I'm focused on the government changing the way they do things."

After meeting with the prime minister last week, Singh said Trudeau showed a willingness to work with the NDP on certain shared priorities when MPs take their seats in the House of Commons early next month.

He wouldn't say if there have been any further conversations between Liberals and NDP officials since then, as the governing party works out how they will win the support of enough opposition MPs to remain in power.

Be he did say he remains encouraged.

"So far, what I can tell you is that there has been an openness," Singh said.

While there may be a "host of measures where there is some alignment," Singh said, noting that is something Trudeau raised during their meeting, the NDP leader is not holding his breath when it comes to waiting for the Liberals to work in full collaboration with his caucus.

"The benefit of having New Democrats is that we're going to push the Liberal government, we're going to push Prime Minister Trudeau to deliver for Canadians," Singh said. "That hasn't been the case in the past. There seems to be a preference of helping those at the very top. I want to change that and I've been given some confidence that there's an openness to do that."

Singh and his caucus were sworn in as members of Parliament in a joint ceremony on Tuesday afternoon.

During a speech before the ceremony, Singh commented that while he's happy with how the NDP performed in the campaign, he is not satisfied with remaining in fourth place in the House Commons.

He wants to make sure the NDP, which now holds 24 seats, forms government so his party can implement its platform policies and initiatives.

In the meantime, Singh talked about the people his caucus will fight for, including Grassy Narrows First Nation and the children and families at the heart of Canadian Human Rights Tribunal ruling that ordered Ottawa to pay $40,000 each in compensation to Indigenous children who were wrongly placed in foster care after 2007.

"When an MP gets elected, we're often told to remember who sent you here — the people who voted for you and your constituents. And I think that's so important," he told his caucus.

"But I also think it's important for us to go one step further, for us to remember who we're fighting for," he said.

"I believe the reason (our) campaign was so inspiring to people was because we made it about people. We made it about the people that we know need us, that are depending on us."

This report by The Canadian Press was first published Nov. 19, 2019.