Wetlands should be seen as a key part of sustainable agriculture 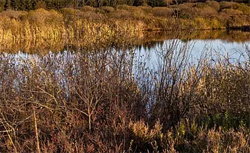 Farmers need to learn to work with wetlands.

Ottawa—Wetlands need to be treated as an important component in sustainable agriculture systems and farmers should be encouraged to protect them for the benefits they offer, says a report from the Canadian Agri-Food Policy Institute (CAPI).

Governments need to take a lead role in demonstrating to producers the financial benefits of restoring wetlands and conservation methods to restore them, said the group research paper prepared for CAPI by Paul Benalcazar, Vivekananthan Kokulan, Alexandre Lillo and Jean-Pascal Matteau.

They should also explain the best management practices that promote biodiversity and ecosystem services, the report said. Wetlands provide “benefits in the long term due to the advantages of having multiple ecosystems on their lands which can with crop production and biodiversity.

“New technologies available in agriculture should be promoted as they provide financial benefits for farmers and environmental benefits for society, therefore allowing for the passive restoration of wetlands.”

Wetlands across Canada are under stress because of the expansion of agriculture and urbanization, the report said. “Their substantial loss has had significant repercussions, including on water quality and quantity. Yet, wetlands are remarkable ecosystems.”

Scientific research has shown that wetlands provide flood control, improve water quality, and enhance carbon sequestration, the report said. There is a need for more interdisciplinary research to create a comprehensive picture of the existing knowledge and protective mechanisms relating to wetlands.

They aid in crop pollination, providing nutrients for crops from the breakdown of organic matter, contaminant degradation and agricultural pest control as well as helping conserve water quality and quantity, the report said. “In addition, wetlands buffer water supplies by holding water during droughts, maintain water quality by filtering nutrients and pesticides and reduce greenhouse gases by building and storing soil carbon.

“Not only could wetland conservation produce a greener agriculture, but valuing wetlands could lead to a more productive sector. Healthy wetlands are indeed a driver of more sustainable agriculture, both from an environmental, economic and social point of view.”

Almost 75 per cent of Prairie pothole wetlands and 68 per cent of Ontario wetlands have been drained and converted to agricultural lands.

This continues to happen “even though research has clearly shown that it could lead to higher annual streamflow and flood peaks,” the report said.

Buffer strips along with riparian zones help to reduce nitrogen and phosphorous leaching into waterways and reduce sedimentation by retaining soil and preventing erosion into waterways.

“Better profit margins can also be achieved by reducing investments in fields that have lower yields and minimal profit margins,” the report said. Crop yield data can be used to develop high-resolution maps of the farm in implementing conservation practices.

“The conservation practices tested, like seeding multiple perennial plants and legumes, would be beneficial for wetlands conservation by supporting pollinator populations, reducing nitrate leaching, preventing erosion and phosphorus leaching into wetlands and enhancing wildlife biodiversity by providing more varied habitats. Also, this new paradigm of reducing investments in less productive fields argues against the draining of in-farm wetlands as the investment may yield high returns.”