Antimicrobial resistance is threat to the national economy and the health of Canadians, report warns 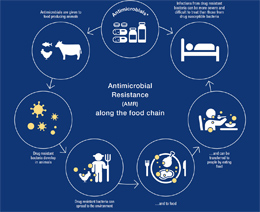 Economic impact could be as great as health threat.

Ottawa—Growing resistance to modern medicines is not only a threat to the health of Canadians, it could become an economic disaster if action isn’t taken, warns a report from the Canadian Council of Academics (CCA).

“For a country such as Canada, the implications of antimicrobial resistance (AMR) are stark,” says the report, which was commissioned by the Public Health Agency of Canada as part of an Action Plan it intends to release in the New Year.

“AMR is already having negative health, economic, and social impacts, and these will only worsen if actions are not taken to combat it,” said the report prepared by a multidisciplinary panel of experts in human and veterinary medicine, public policy, and industrial practices.

Canada will be greatly changed within a few decades if AMR isn’t dealt with, the report said. “The economy will shrink, the healthcare system will be less sustainable, and social inequality will further increase.

“It is clear that AMR needs not only to be seen as a scientific and healthcare issue, but also as an economic and security threat,” the report said. The UN has warned that AMR could become a bigger killer by 2050 than cancer.

Farm groups in Canada have taken major steps to reduce the use of human critical drugs in treating livestock. “Agriculture is also experiencing the effects of AMR, with the health of animals and current industrial practices under threat.

“There is no doubt that antimicrobials are an essential part of Canada’s economy,” their report said. “First-line antimicrobials contributed to saving at least 17,000 lives and preventing 2.6 million hospital days in 2018 while generating $6.1 billion in economic activity in Canada.”

Effective antimicrobials are running out with alarming consequences of the future. “The Canadian economy has already begun to shrink as a result of AMR, as the number of deaths has increased and fewer people are able to work due to illness.”

AMR reduced Canada’s GDP by $2.0 billion in 2018, “with much of this effect concentrated in industries such as hospitality, transportation, and education, where human interaction is central to the services provided,” the report said. Unchecked AMR could reduce Canada’s GDP by $13 billion to $21 billion a year by 2050.

Stewardship initiatives, which promote the judicious use of antimicrobials, represent another major opportunity to limit the impact of AMR, the report said. It endorsed “a One Health approach, which includes all sectors collaborating to address AMR and incorporating leading practices, while stakeholders from both the human and animal health sectors coordinate actions.

“From the human health perspective, antimicrobial use as measured through prescriptions dispensed remains stable in Canada, but there may be an opportunity for targeted interventions that reduce unnecessary use.”

The report called for making research and innovation “a fundamental mitigation strategy, complementing known interventions that already have an immediate impact in reducing the effects of AMR.

“Alternative therapies are also being developed to treat or prevent resistant infections, including vaccines, phage therapy, lysins, and antimicrobial adjuvants, and the potential of the microbiome is being explored,” the report said.